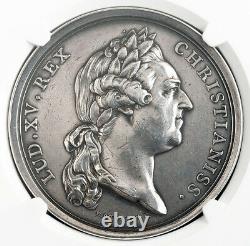 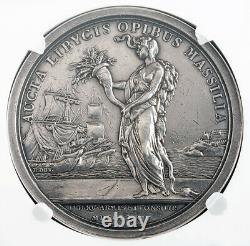 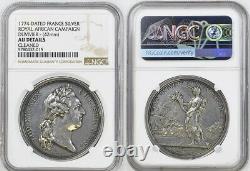 Three sailships at sea sailing to Fort Saint-Jean (the entrance of the Old Port of Marseille). Legend:AUCTA LIBYCIS OPIBUS MASSILIA. Marseille enriched with the treasures of Africa. The Royal African Company is one of the many French colonial companies that was founded in 1560 for the purpose of trading in North Africa. After being dissolved in 1710, it was reformed in 1741 by an edict from Louis XV.

This company with enormous capital, headquartered in Marseille, bought with its equipment, the Bastion de France located near Bône on the Algerian-Tunisian border. In the second half of the 18th century, French trade was very prosperous in Algeria. The Royal African Company kept the exploitation of the African concessions for almost 60 years, from 1740 to 1793.

It was the only company of the Ancien Régime to pay dividends to its shareholders, given its very lucrative activities and its monopoly with Algeria, for wheat and also for coral. The company will be permanently abolished like its sisters under the Revolution, after being renamed the Agence d'Afrique. Louis XV (Versailles, 15 February 1710 Versailles, 10 May 1774) ruled as King of France and of Navarre from 1 September 1715 until his death on 10 May 1774. Coming to the throne at the age of five, Louis reigned until 15 February 1723, the date of his thirteenth birthday, with the aid of the Régent, Philippe, duc d'Orléans, his great-uncle, thereafter taking formal personal control of government. Unexpectedly surviving the death of most of the royal family, he enjoyed a favourable reputation at the beginning of his reign and earned the epithet.

However, in time, his lack of morals, general inability to effectively reform France and the Monarchy, and the perceived failings of his foreign policy lost him the affection of his people, and he ended his life amongst the most unpopular kings of France. While historians have traditionally treated Louis XV harshly, more recent research has suggested that he was in fact very intelligent and dedicated to the task of ruling the largest state in Europe, bar Russia. His nagging indecision, fueled by his awareness of the complexity of problems ahead, as well as his profound timidity, hidden behind the mask of an imperious king, may account for the poor results achieved during his reign. In many ways, Louis XV prefigures the "bourgeois rulers" of the romantic 19th century. While dutifully playing the role of the mighty king carved out by his predecessor and great-grandfather, Louis XIV, Louis XV in fact cherished nothing more than his private life far away from the pomp and ceremony of Court.

Having lost his mother while still little more than an infant, he longed for a reassuring and motherly presence, which he tried to find in the intimate company of women, something for which he was much criticized both during and after his life. The item "1774, France, Louis XV. Rare Silver The Royal African Company Medal. NGC AU+" is in sale since Friday, December 3, 2021. This item is in the category "Coins & Paper Money\Coins\ World\Europe\France".

The seller is "coinworldtv" and is located in Wien. This item can be shipped worldwide.