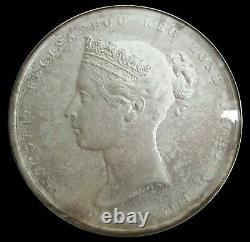 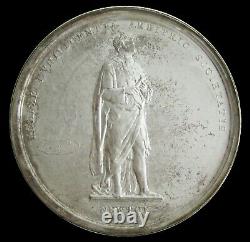 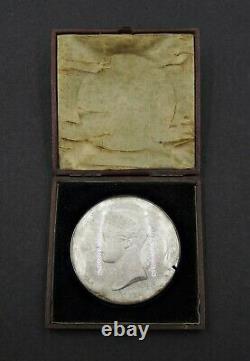 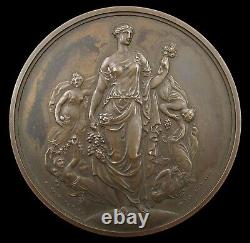 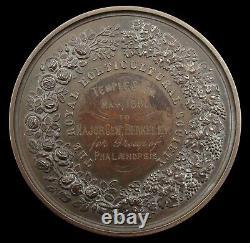 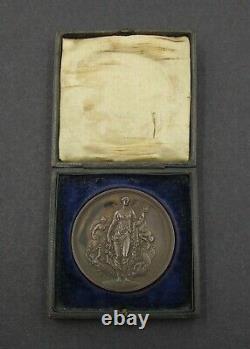 Obverse with young head portrait of Queen Victoria, reverse with a statue of Newton alongside a planetary solar system. Encased within glass lunettes surrounded by a silver band engraved'Rev Miles Joseph Berkeley, 1863'. The silver Queen's Medal is accompanied by a bronze Royal Horticultural Society medal engraved with'Temple Show - May 1891 - To Major Genl Berkeley - For Group Of - Phalaenopsis'. Both medals cased, although cases somewhat distressed. The bronze medal is Good Very Fine, the silver medal with frosted surfaces, as struck in terms of wear but with some mottled toning.

Very rare and an important association piece. The Queen's Medal has been awarded to such distinguished figures as Thomas Huxley, Michael Faraday and Charles Darwin. Miles Joseph Berkeley (1 April 1803 30 July 1889) was an English cryptogamist and clergyman, and one of the founders of the science of plant pathology.

His work is indicated within written texts by the author abbreviation. His Introduction to Cryptogamic Botany , published in 1857, and his papers on Vegetable Pathology in the Gardener's Chronicle in 1854 and onwards, show that he had a broad grasp of the whole domain of physiology and morphology as understood in those days. Berkeley began his work as a field naturalist and collector, his earliest objects of study having been the mollusca and other branches of zoology, as testified by his papers in The Zoological Journal and the Magazine of Natural History , between 1828 and 1836. His herbarium at the Royal Botanic Gardens, Kew, is one of the world's most extensive, containing over 9000 specimens as well as numerous notes and sketches.

It has been said that... When the history of Plant Pathology is elaborated, Berkeley's name will undoubtedly stand out more prominently than that of any other individual. In fact, it is not saying too much to pronounce Berkeley as the originator and founder of Plant Pathology. In 1857, Miles Joseph Berkeley was elected as member of the German Academy of Sciences Leopoldina. In June, 1879 he was elected a Fellow of The Royal Society and was awarded their Royal Medal in 1863. Christ's College made him an honorary fellow in 1883. He died at his vicarage, Sibbertoft, near Market Harborough, on 30 July 1889. Coopers Coins - Royal Society Medal. I cannot be held responsible for items lost in transit that have been sent uninsured. The item "1838 ROYAL SOCIETY QUEEN'S MEDAL 72mm SILVER CASED BY WYON" is in sale since Wednesday, October 20, 2021. This item is in the category "Coins\Historical Medals/Medallions\British\19th Century".

The seller is "cooperscoinscom" and is located in Essex. This item can be shipped worldwide.