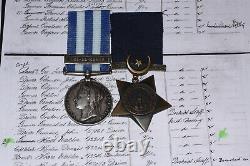 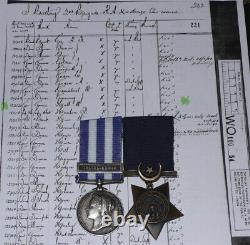 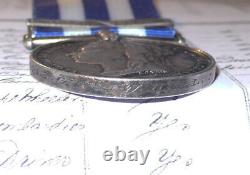 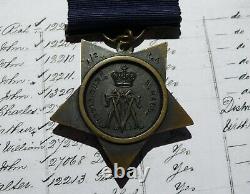 The medals were awarded to a Gunner serving with I Battery, 2 Brigade, Royal Artillery and are named as follows. 1882 Egypt Medal with Tel-EL-Kebir clasp to : 12213. 1882 Khedive Star named on Reverse to; 12213. Both medals confirmed on rolls. Gunner Walter Hall served during the Egypt 1882 campaign and is confirmed on the rolls as being present at the Battle of Tel-el-Kebir, qualifying for the medal, clasp and Star. The medal comes with a copy of the rolls featuring Mr Hall for the Egypt Medal/clasp and also the Khedive Star. Also included is a copy of the 1881 Census, where a Walter Hall is listed as being born in Gloucester and is living-in at the Royal Artillery Barracks in Aldershot, aged nineteen. This could well be him but we've not even checked Ancestry or FMP etc, so more research certainly possible and needed on Walter Hall. The medals are in a good VF condition with the odd light contact mark to the Egypt Medal from the Star.

The item "1882 EGYPT MEDAL, CLASP & NAMED KHEDIVE STAR TO I BATT, 2 BDE, ROYAL ARTILLERY" is in sale since Monday, December 21, 2020. This item is in the category "Collectables\Militaria\19th Century (1800-1899)\Medals/ Ribbons". The seller is "santlache_sales" and is located in Leighton Buzzard.