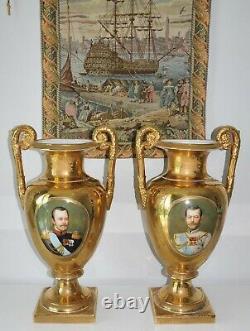 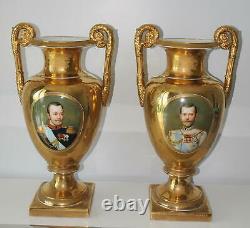 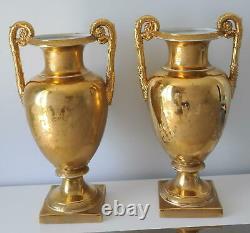 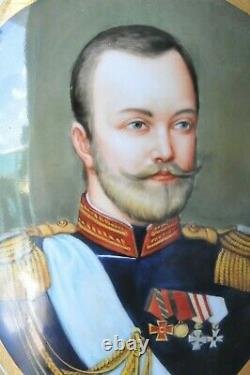 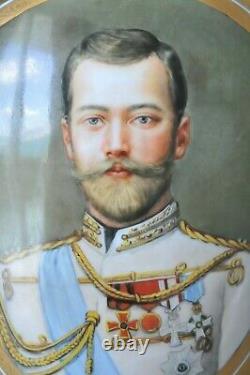 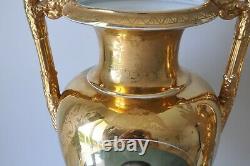 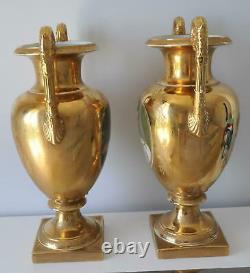 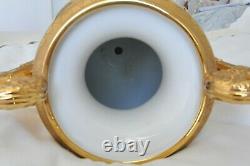 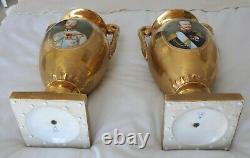 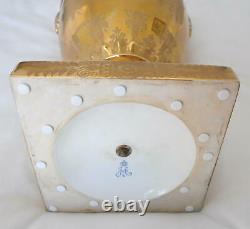 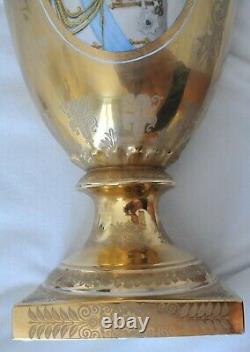 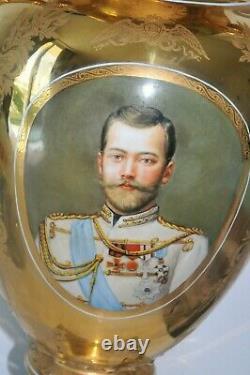 14 inch in width in the widest part. Imperial Presentation Porcelain Vases with original gilding 22k. The bodies of both bandeau shaped vases have a rich plum colored ground, and are decorated with handles shaped as acanthus scrolls. The superb execution of the raised ornamentation creates an illusion of gilded chased metal.

The precious Pair of Imperial Presentation Porcelain Vases!! Petersburg, presumably by Vasily Meshcheriakov 1895 year. This Imperial Vases mysteriously disappeared after the communists seized power in 1917 and plunged Russia into civil war, but a decade later they found their way to an American collection.

By unexplained circumstances 26 inches high vases probably left Russia during the sell-off of Imperial treasures in "Torgsin" that was the policy of the new Soviet Government. Their great value owes to the fact that they were made for the Czar and the empires most powerful aristocrats. The vases are large and difficult to produce, and they were made by the leading porcelain artists and craftsmen of the period. The rediscovery of these two Imperial vases is very exciting, first and foremost because they are of extremely high quality and date from the reign of Nicholas I, the golden era of Russian porcelain production Hermitage Museum in St Petersburg, the former Imperial capital where the vases were made. "In addition, its an incredible surprise to find Russian Imperial vases in the heart of the American "Wild West, which Soviet propaganda told us was a brutal and lawless place. The bodies of both bandeau shaped vases have a rich gold background with gold impression on it , and are decorated with handles shaped as acanthus scrolls. One vase is decorated with a painting.

Nikolai II Aleksandrovich; 18 May 1868 17 July 1918, known as Saint Nicholas the Passion-Bearer in the Russian Orthodox Church, was the last Emperor of Russia, ruling from 1 November 1894 until his forced abdication on 15 March 1917. According to Hermitage experts, we know that this 19th century original visual technique of painting is presented in the most famous museums of the world. But we do know that Vasiliy Meshcheriakov 1781-? Was the author of the greatest artist of porcelain.

He was one of the factorys best copyists, who frequently reproduced pictures on vases, many of which can still be seen in the Hermitage porcelain collection, and in other major Russian museums. "The Hermitage has a pair of the similar vases with a gold background and with the same gilded décor, ". Russian Imperial porcelain a brief history. The Imperial Porcelain Factory was founded in 1744 by Empress Elizabeth I, the daughter of Peter the Great. It is one of oldest porcelain factories in the West, and was the personal property of the Russian royal family, primarily working to outfit imperial palaces with the finest tableware and items for interior decoration. During the reign of Nicholas I (1796 - 1855, emperor since 1825), the Imperial Porcelain Factory achieved an unprecedented level of production. Professional masters, benefitting from an improved production cycle, perfected the artistic quality of the factorys output. Large porcelain vases were the most prized items, and they were given the best spots in palace interiors: placed above fireplaces, rested on special pedestals in the center or corners of rooms, and flanked grand staircases. The very best vases of this sort, created during the reign of Emperor Nicholas I (1825 - 1855), were intended as magnificent surrounds for the finely painted copies of canvases which decorated their façades.

This item is in the category "Collectibles\Decorative Collectibles\Vases". The seller is "rima83" and is located in North Miami Beach, Florida. This item can be shipped to United States.