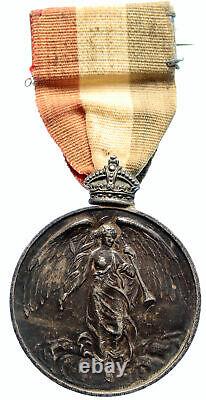 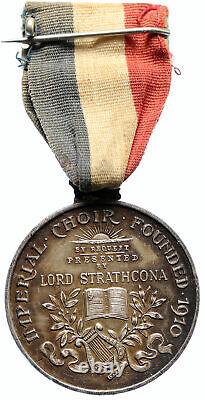 Item: i95925 Authentic Medal of. England Great Britain Foundation of the imperial choir by Lord Strathcona 1910 Silver Ribbon Medal 65mm x 31mm (17.27 grams) Reference: N# 184235 Winged female figure holding olive branch and trumpet, crown above. 1910 BY REQUEST PRESENTED BY LORD STRATHCONA, Music book over lyra surrounded by laurel branches. The United Kingdom of Great Britain and Northern Ireland, commonly known as the United Kingdom (UK) or Britain. Is a sovereign country in north-western Europe, off the north-­western coast of the European mainland. The United Kingdom includes the island of Great Britain, the north-­eastern part of the island of Ireland, and many smaller islands within the British Isles. Northern Ireland shares a land border with the Republic of Ireland. Otherwise, the United Kingdom is surrounded by the Atlantic Ocean, with the North Sea to the east, the English Channel to the south and the Celtic Sea to the south-west, giving it the 12th-longest coastline in the world. The Irish Sea separates Great Britain and Ireland. The total area of the United Kingdom is 93,628 square miles 242,500 km.

The United Kingdom is a unitary parliamentary democracy and constitutional monarchy. The monarch, Queen Elizabeth II, has reigned since 1952. The capital and largest city is London, a global city and financial centre with an urban area population of 10.3 million.

Most of Ireland seceded from the UK in 1922, leaving the present United Kingdom of Great Britain and Northern Ireland, which formally adopted that name in 1927. The nearby Isle of Man, Guernsey and Jersey are not part of the UK, being Crown Dependencies with the British Government responsible for defence and international representation. There are also 14 British Overseas Territories, the last remnants of the British Empire which, at its height in the 1920s, encompassed almost a quarter of the world's landmass and a third of the world's population, and was the largest empire in history. British influence can be observed in the language, culture and the legal and political systems of many of its former colonies.

The United Kingdom has the world's fifth-largest economy by nominal gross domestic product (GDP), and the tenth-largest by purchasing power parity (PPP). The UK became the world's first industrialised country and was the world's foremost power during the 19th and early 20th centuries.

Today the UK remains one of the world's great powers, with considerable economic, cultural, military, scientific, technological and political influence internationally. It is a recognised nuclear state and is ranked sixth globally in military expenditure.

It has been a permanent member of the United Nations Security Council since its first session in 1946. The United Kingdom is a member of the Commonwealth of Nations, the Council of Europe, the G7, the Group of Ten, the G20, the United Nations, NATO, the Organisation for Economic Co-operation and Development (OECD), Interpol, and the World Trade Organization (WTO). It was a member state of the European Communities (EC) and its successor, the European Union (EU), from its accession in 1973 until its withdrawal in 2020 following a referendum held in 2016.

World-renowned expert numismatist, enthusiast, author and dealer in authentic ancient Greek, ancient Roman, ancient Byzantine, world coins & more. Ilya Zlobin is an independent individual who has a passion for coin collecting, research and understanding the importance of the historical context and significance all coins and objects represent.

Send me a message about this and I can update your invoice should you want this method. Getting your order to you, quickly and securely is a top priority and is taken seriously here. Great care is taken in packaging and mailing every item securely and quickly.

What is a certificate of authenticity and what guarantees do you give that the item is authentic? You will be very happy with what you get with the COA; a professional presentation of the coin, with all of the relevant information and a picture of the coin you saw in the listing. Additionally, the coin is inside it's own protective coin flip (holder), with a 2x2 inch description of the coin matching the individual number on the COA. Whether your goal is to collect or give the item as a gift, coins presented like this could be more prized and valued higher than items that were not given such care and attention to. When should I leave feedback?

Please don't leave any negative feedbacks, as it happens sometimes that people rush to leave feedback before letting sufficient time for their order to arrive. The matter of fact is that any issues can be resolved, as reputation is most important to me. My goal is to provide superior products and quality of service. How and where do I learn more about collecting ancient coins? Visit the "Guide on How to Use My Store". For on an overview about using my store, with additional information and links to all other parts of my store which may include educational information on topics you are looking for.

This item is in the category "Coins & Paper Money\Exonumia\Medals". The seller is "highrating_lowprice" and is located in this country: US.