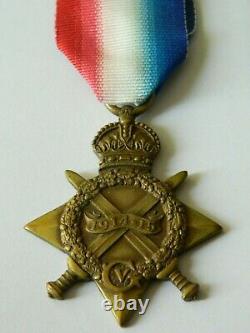 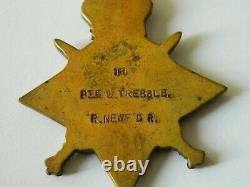 A scarce 1915 star to 18 PTE W TREBBLE R. William Trebble, a fireman from 11 Knight Street, St John's enlisted in the Royal Newfoundland Regt as one of the famous first 500 on 7th September 1914.

The Newfoundlanders were to leave their position as soon as possible and advance to the German front line. The 1st Essex, on their right, would also attack. Hadow asked questions: Were the German trenches held by British or Germans?

He was told that the situation was uncertain. Was he to move independently of the Essex?

Colonel Hadow must have been unhappy, but he had been given a direct order. He gave out his own orders and in a few minutes the battalion was ready. The Newfoundlanders had to go 300 yards before reaching the British front line and then a similar distance across No Mans Land.

In view of the urgency of their orders they went straight over the top from the reserve trench, instead of going to the front line by way of congested communication trenches. As soon as they appeared in the open, the German machine-gunners spotted them and opened fire. No artillery bombardment kept the Germans heads down; no other targets distracted them, for the Essex had not appeared.

They concentrated their fire on the 752 Newfoundlanders advancing over the open ground less than half a mile away. Before the men could even get into No Mans Land they had to pass through several belts of British barbed wire. As the Newfoundlanders bunched together to get through the narrow gaps in this wire, the German machine-gunners found their best killing ground.

Dead and wounded men soon blocked every gap, but those still not hit struggled on, having to walk over their comrades bodies. More experienced or less resolute men might have given up and sought shelter in such impossible conditions, but not the Newfoundlanders. Those who survived to reach No Mans Land continued towards the German trenches, but they had no chance. A few dozen men could not cross No Mans Land without any support in broad daylight and, inevitably, the German fire cut these down.

The attack was watched by a survivor of an earlier attack from a nearby shell hole: On came the Newfoundlanders, a great body of men, but the fire intensified and they were wiped out in front of my eyes. I cursed the generals for their useless slaughter, they seemed to have no idea what was going on Private F.

Cameron, 1st Kings Own Scottish Borderers. Only a handful of Newfoundlanders reached the German wire. The attack had lasted forty minutes. Rarely can a battalion have been so completely smashed in such a short time. Of those who had attacked, ninety-one per cent had become casualties - twenty-six officers and 658 men.

As Martin Middlebrook notes, for many years the barbed-wire defences were also preserved but these had to be be removed as too many sheep were trapped in the wire, but numerous iron picket bars that originally supported the wire remain in place. In fact, the park constitutes the best preserved trench system to be found on the Somme today, the whole overlooked by a spectacular bronze caribou, atop a mound of granite, the official memorial to Newfoundlands fallen. The losses sustained by the Newfoundland Regiment at Beaumont-Hamel on July 1, 1916, were staggering. Of the some 752 Newfoundlanders who went into battle that morning, only 68 were able to answer the roll call the next day.

The dead included 14 sets of brothers, including four lieutenants from the Ayre family of St. The Newfoundlanders' sacrifice did not go unnoticed on the front lines.

The commander of the 29th British Division said of the actions of the Newfoundland Regiment on that July morning. It was a magnificent display of trained and disciplined valour, and its assault only failed of success because dead men can advance no further. Trebble Place in St John's was named after William Trebble in 2003. The item "1915 Star medal to Trebble, Royal Newfoundland Regt, 1st July 1916 casualty" is in sale since Tuesday, April 20, 2021. This item is in the category "Collectables\Militaria\World War I (1914-1918)\Medals/ Ribbons".

The seller is "rhinohide2" and is located in Canterbury. This item can be shipped worldwide.