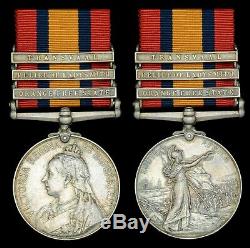 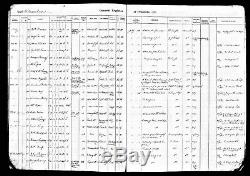 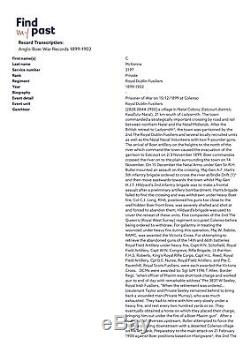 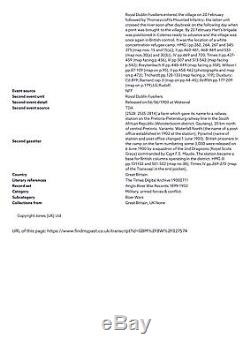 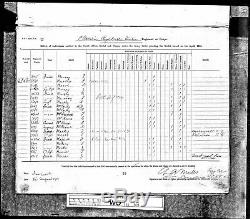 Prisoner of War on 15/12/1899 at Colenso. The town commanded a strategically important crossing by road and rail between northern Natal and the Natal Midlands.

After the British retreat to Ladysmith, the town was garrisoned by the 2nd The Royal Dublin Fusiliers and several locally recruited units as well as the Natal Naval Volunteers with two 9-pounder guns. The arrival of Boer artillery on the heights to the north of the river which command the town caused the evacuation of the garrison to Estcourt on 2/3 November 1899. Boer commandos crossed the river on to the plain surrounding the town on 14 November.

On 15 December the Natal Army under Gen Sir R. Buller mounted an assault on the crossing, Maj-Gen A. Hart's 5th infantry brigade ordered to cross the river at Bridle Drift (1) and then move eastwards towards the town whilst Maj-Gen H. Hildyard's 2nd infantry brigade was to make a frontal assault after a preliminary artillery bombardment. Hart's brigade failed to find the crossing and was withdrawn under heavy Boer fire; Col C.

Long, RHA, positioned his guns too close to the well hidden Boer front lines, was severely shelled and shot at and forced to abandon them; Hildyard's brigade was used to cover the retreat of these units. Five companies of the 2nd The Queen's (Royal West Surrey) regiment occupied Colenso before being ordered to withdraw. For gallantry in treating the wounded under heavy fire during this operation, Maj W.

Ravenhill, Royal Scots Fusiliers, were each awarded the Victoria Cross. DCMs were awarded to: Sgt IoM 1196 T Allen, Border Regt, "when officer of Maxim was shot took charge and worked gun to end of day with remarkable address" Pte 3837 W Seeley, Royal Irish Fusiliers, When the retirement was orderedLieutenant Taylor and Private Seeley remained behind to bring back a wounded man (Private Murray), who was much exhausted. They had to retire with him very slowly under a heavy fire, and rest every two hundred yards or so. They eventually obtained a horse on which they placed their charge, bringing him out under the fire of a Boer Maxim gun. After a sequence of reverses upstream, Buller attempted to force the Thukela crossing downstream with a deserted Colenso village on his left flank. Preparatory to the main attack on 21 February 1900 against Boer positions based on Hlangwane, the 2nd The Royal Dublin Fusiliers entered the village on 20 February followed by Thorneycroft's Mounted Infantry; the latter unit crossed the river soon after daybreak on the following day when a pont was brought to the village. By 22 February Hart's brigade was positioned in Colenso ready to advance and the village was once again in British control. It was the location of a white concentration refugee camp. 262, 264, 267 and 345-375 map nos. 15 and 15(a), II pp. 460-461, 468-469 and 533 map nos. 30(a) and 30(b), IV pp. 669 and 700; Times II pp. 507 and 513-542 map facing p. 458-462 photographs and map on p. Second event detail: Released on 06/06/1900 at Waterval. Variants: Waterfall North (the name of a post office established in 1902 at the station); Pyramid (name of station and post office changed 1 June 1905).

British prisoners in the camp on the farm numbering some 3,000 were released on 6 June 1900 by a squadron of the 2nd Dragoons (Royal Scots Greys) commanded by Capt F. The station became a base for British columns operating in the district. 101102 and 501-502 map no.

The seller is "cartawho" and is located in London. This item can be shipped to North, South, or Latin America, all countries in Europe.