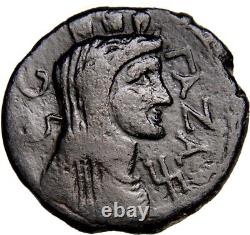 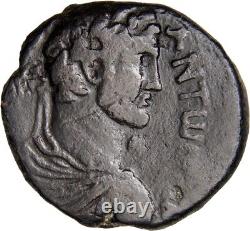 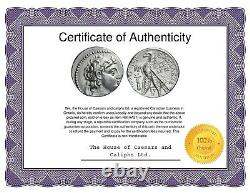 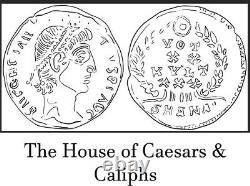 Yashin -; Rosenberger -; Sofaer 85; RPC IV. Very rare date for the series. This coin carries a very rare date in the voluminous dated coinage struck at Gaza under Antoninus Pius. Whereas Gaza's coinage was somewhat sporadic under previous emperors and often connected to military movements or imperial visits, it was struck in every year of Antoninus Pius except for 206 (AD 145/6), the year immediately following the emission of the present rare issue. It has been suggested that the apparent need for bronze coinage in this period might be connected to the cost of reorganizing of the old province of Judaea as Syria Palaestina.

This view seems to be supported by a similar uptick in production at Ascalon and Aelia Capitolina at the same time. The reverse type is rather enigmatic, but traditional at Gaza.

It features a large Phoenician letter mem (M) which is generally believed to represent Marnas, the chief deity of the city. It been argued that the name of Marnas is actually an Aramaic term meaning "Our Lord" and is essentially equivalent to the use of Ba'al ("Lord") as the title of other Semitic gods. Marnas may be a survival of the old Philistine fertility deity Dagon. In the Roman period his temple was located in the very heart of the city of Gaza.

This item is in the category "Coins & Paper Money\Coins: Ancient\Roman: Imperial (27 BC-476 AD)". The seller is "houseofcaesarscaliphsnumis" and is located in this country: CA.