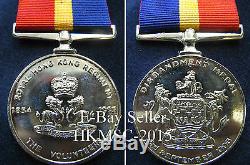 Disbandment took place 3rd September 1995, this is recorded on the rear of the medal. The medal was available to those serving with the Regiment as the end of the Crown Colony became imminent. Two oriental dragons beneath the British crown and a banner-' NULLI SECUNDUS IN ORIENTE' (Second to none in the Orient) - the regimental motto. Formed from a local militia in 1854 the RHKR(V) (Royal prefix from 1970) has experienced a varied military history under joint British and Hong Kong Government administration. It was disbanded in 1995 following its release from British control on return of the colony to the Chinese Government in 1997.

This illustrious Regiment was a Part of the British Hong Kong Garrison disbanded in 1995 Due to Hong Kong will Handover to China on 1997. It would be a nice addition to any collection, super display piece or genuine period prop. Nice piece In Great Condition...