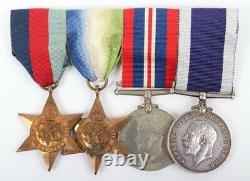 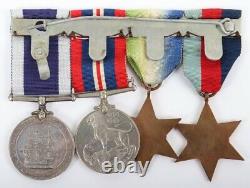 He enlisted in the Royal Navy towards the latter stages of the Great War. He served on various training ships and shore establishments etc. In 1920s he joined the Submarine service and appears to have served on various ships including L7, L1, L2, L27, etc. He received the Long Service Good Conduct medal whilst with HMS Dolphin, Submarine training establishment. He would continue to serve in WW2 and was serving on Submarine HMS Shark when in 1940 she was attacked by German aircraft and eventually sunk, for his actions in trying to repel this attack, McDonald was decorated with the Distinguished Service Medal D.

M, which appeared in the London Gazette 21st August 1945. For great gallantry, steadfastness and devotion to duty whilst serving in H. On 6th July, 1940, the Shark was forced to come to the surface through damage inflicted by aircraft and could neither dive nor steer a course for home. She fought off continuous attacks by sea-planes, bombers and fighters for more than three hours and caused at least one aircraft to retire seriously damaged. The Submarine Association In-Depth Newsletter, gives the following information about HMS Shark, HMS Shark was sunk on 6th July 1940 after being caught on the surface off the coast of Norway.

Several bombs exploded close astern and severely damaged the propulsion. The submarine dived in an attempt to get to safety but resurfaced to in order to charge up the batteries and attempt to escape under cover of darkness. Both engines were re-started but the Port engine was out of line and the rudder was jammed hard to port. The submarine was relocated by enemy aircraft and attacked again.

Unable to dive owing to a lack of high-pressure air, a low battery and flooding the Commanding Officer attempted to fight his way out but was forced eventually to surrender. 27 of the crew were un-injured, 12 (including commanding officer) were wounded and 2 were killed. HMS Shark sank as the Germans were attempting to tow it to Stavanger. The item "British Royal Naval Submariners DSM Winners Long Service Medal Group HMS SHARK" is in sale since Saturday, May 22, 2021.