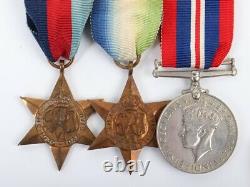 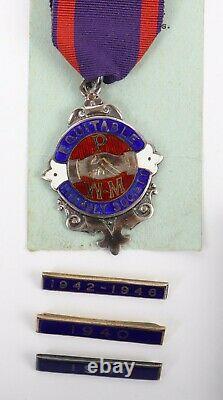 British Royal Navy HMS Royal Oak 14th October 1939 Killed in Action Medal Group, consisting of 1939-45 star, Atlantic star and 1939-45 War medal, all un-named as issued. Accompanied by named Admiralty condolence slip William John Ford and hallmarked silver masonic / society medal engraved to the reverse BRO. CWGC only lists one casualty of the Royal Navy with this full name in WW2, this is P/JX 144165 Able Seaman William John Ford, he was serving on HMS Royal Oak when she was sunk off Scapa Flow by torpedoes from German U-Boat U-47 on 14th October 1939. The sinking of HMS Royal Oak was of great propaganda importance to the Third Reich, the U-Boat commander, Gunther Prien, became a instant celebrity in Nazi Germany, being awarded the Knights Cross of the Iron Cross for the action.

The sinking of the Royal Oak, came as a shock to the Royal Navy and the British public as it was the first battleship to be sunk in the war and also was docked at the Scapa Flow naval base, which the British authorities believed to be impregnable to German U-Boat attack. Here crew were 1,234 men and boys, of this number 835 were killed on the night of the attack or died of wounds later. The wreck of the Royal Oak is a designated War Grave, Every year Royal Navy divers lay a white naval ensign on her stern to commemorate her loss. One of the most iconic naval casualties in the history of the Royal Navy.

The item "British Royal Navy HMS Royal Oak 14th October 1939 Killed in Action Medal Group" is in sale since Saturday, May 22, 2021. This item is in the category "Collectables\Militaria\World War II (1939-1945)\Medals/ Ribbons". The seller is "mt-ma2019" and is located in Ashford. This item can be shipped to North, South, or Latin America, all countries in Europe, all countries in continental Asia, Australia.