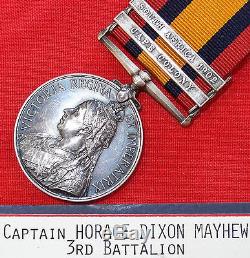 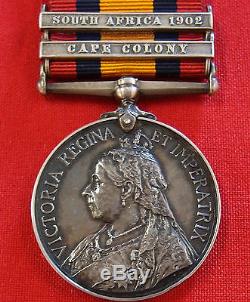 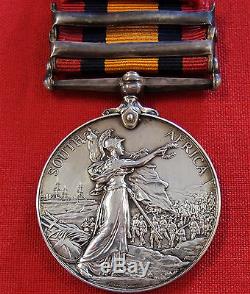 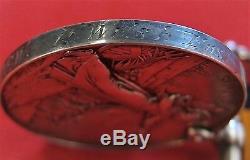 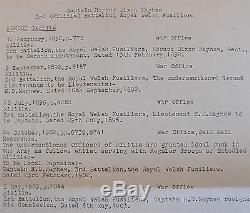 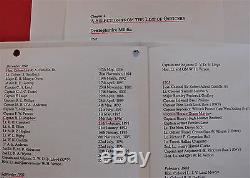 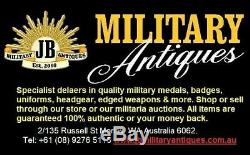 De Saulles; attributed on the edge in correct officer's sloped style Capt: H. Welsh Fus: on correct ribbon. The medal was instituted in 1899 to be awarded to participants in the Boer War. Rarely will you see a 3rd Battalion (Militia) officer's Q.

Horace Dixon Mayhew was born on the 11th June 1874, Hindly, Lancashire and was the son of Horace Mayhew and Mary Helena Dixon. He was appointed a 2nd Lieutenant in the 3rd (Militia) Battalion, Royal Welsh Fusiliers in February 1892. Advanced to Captain in July 1896, he served in Cape Colony during the Boer War (Medal & 2 clasps) with the 3rd Battalion, R. And also attached to the 4th Yorkshire Regiment.

He is sometimes listed in civilian life as a mining engineer and died 12th August 1906, in Sydney, Nova Scotia. We list militaria and coins weekly. We provide quality mounted medals, badges and historical research. We can mount your miniature or full size medals, ribbon bars or supply replacement ribbons or badges. We can also conduct military research on your behalf and value cherished objects with a current market or insured value.

The item "CAPTAIN ROYAL WELSH FUSILIERS PRE WW1 BRITISH ARMY QUEENS SOUTH AFRICA MEDAL QSA" is in sale since Monday, December 12, 2016. This item is in the category "Collectables\Militaria\1914 - 1918 (WWI)". The seller is "jb_military_antiques_14" and is located in 2/135 Russell St, Morley, Perth, WA. This item can be shipped worldwide.