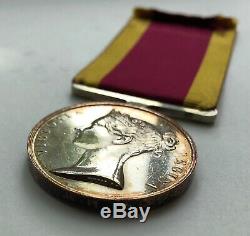 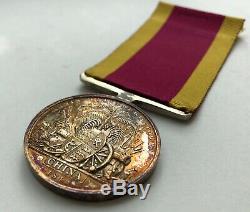 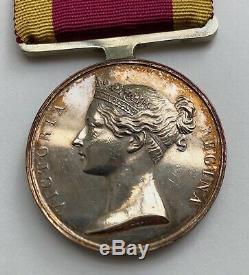 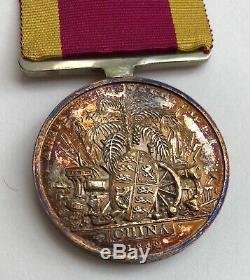 Melville was present at actions of capture of Chuenpee Hill Forts 7/1/41 and capture of forts and emplacements on Bocca Tigris 26/2/41. Stephen Slade was born c. 1816, in Portsea, Southampton, England. He is described as 5 foot and 7 inches tall, sallow complexion, grey eyes, and brown hair. He married Isabella (maiden name unconfirmed) sometime between 1837 and 1847, the muster books for HMS Howe for the later date being the first time he is recorded as married.

He died, 15 May 1856 while serving with the harbor guardship, HMS St. Stephen Slade joined the Royal Navy in 1831 as an ordinary seaman aboard HMS Caledonia , a 1. Rate with 120 guns under the command of Capt. George Bohun Martin, primarily serving in the Mediterranean. His conduct is recorded as Fair. On 8 December 1837, now an able seaman, he joined HMS Meville , a 3. Rate with 74 guns, under Captain Richard Saunders Dundas, the flagship of Rear-Admiral George Elliot, Cape of Good Hope. During the period 1837 and 1840, HMS Melville spent its time in the South Atlantic Ocean sailing between St. Helena, Ascension, Sierra Leone, and the West coast of Africa.

On at least one occasion during 1838, the Melville was involved in combatting the Slave Trade. Hina War 1841-42 (First Opium War). In April 1840, the Melville sailed for China with Rear-Admiral Elliott, having been appointed to the command of the East Indies. They arrived at Chusan Harbor on July 5.

But ran ashore and subsequently Rear-Admiral Elliot had to hoist his flag in HMS Wellesley , leaving HMS Blenheim to heave down the Melville and to assist her repairs. 1841, the Melville covered landings of troops, including a party of her own seaman, and assisted in the capture of Chuenpee Hill Forts and the fortifications at Tycocktow. Both situated guarding the seaward approaches to Canton on the Bogue (also known as Bocca Tigris). She assisted in the action off Bocca Tigris.. Melville passing ahead, brought up with her port bow guns bearing on the battery of Wungtung. Nearly all the forts and. Embrasures on both sides of the Bocca Tigris up to Canton were destroyed. The last of her known contributions in China were on March 1.

Whilst off the Wantong, boats from Melville where sent up the river to Canton. The Melville sailed from Canton for England on 29 March 1841, arriving at Portsmouth in August and being paid off on the 20. His service aboard HMS Melville is recorded as Very Good. For his services during the engagements of January and February 1841, Stephen Slade was entitled the 1842 China medal, which he received while aboard HMS Excellent. Here he served for 9 months, his service being listed first as Good, and later as Very Good, before moving on, as a Gunners Mate, to HMS Winchester , a 4.

Rate with 52 guns, under the command of Captain Charles Eden, flagship of Rear-Admiral Josceline Percy, Cape of Good Hope. After serving for 4 years on the Winchester , he went back to the Excellent , under Captain Henry Ducie Chads, where to stayed for a year, his service continuing to be rated as Very Good. On 2 May 1847 he joined HMS Howe , 1. Rate, 120 guns, under Captain James Stirling, stationed in the Mediterranean. In September, the Howe received special orders to conduct Her Majesty. Victoria's aunt, on trips to Lisbon and Madeira and then back to. Osborne House on the Isle of Wight. Flying the Royal Standard at the main, the Howe entered the River.

King of Portugal, and two princes. After five days of sightseeing, the party set sail for Madeira. Leaving the Tagus, the Howe was struck by a large wave and the Queen slipped and nearly fell overboard, but was saved by Stirling, who in so doing lost his ceremonial sword overboard. During the next few years, the presence of the British and French fleets encouraged an uneasy peace in the eastern Mediterranean.

In 1849 the Howe was recalled. After the Howe, Stephen Slade went again to the Excellent before joining HMS Ceylon in July 1851. The Ceylon was a 5. In February 1853, Stephen Slade was exchanged to HMS Caradoc , a gunboat with 1 gun, at which time he also received a warrant, as Gunner 3. Class, dated 14 February 1853. The Caradoc was commanded by Lieutenant commander Samuel Hoskins Derriman, serving in the Mediterranean but was soon called to the Black Sea to aid in the conflict with Russia.

During the Crimean War, the Caradoc was in service as a dispatch vessel between Marseilles and Constantinople. Frequently used by Field Marshal FitzRoy Somerset, 1. Baron Raglan, more commonly known as, Lord Raglan, the commander of British troops in the Crimea, she was often called Raglan's yacht.

She was made available to Lord Raglan by the Admiralty during the months leading to the invasion of the Crimea. She also carried Lord Burghersh to Marseilles when he took the Alma dispatch to London and then conveyed Lord Raglan's body back to Bristol following his death on 28 June 1855. For his service during the war Stephen Slade received the Crimea War medal, no clasp, which was sent to him on 8 February 1856. Only a few months before he died. Stephen Slade final service was on HMS St Vincent , a 1. Rate of 120 guns, serving as a harbor Guardship for the Ordinary at Portsmouth under Captain George A. The muster for HMS Caradoc shows that he was bound for the Excellent via passage aboard HMS Fisgard in Aug 1855.

The short span of time between his discharge from the Caradoc and his entry with St Vincent would lead us to assume that he did not serve anytime on Excellent. His time with St Vincent was cut short by his death, which is noted on the muster books for St Vincent as Died on shore, 15 May 1856. In total, he had served in the Royal Navy for just over 25 years. Crimea, no clasp (HMS Caradoc). China 1842 (Stephen Slade, HMS Melville).