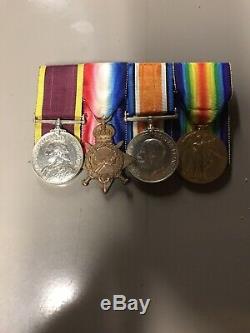 CHINA WAR MEDAL 1900 1914-15 Trio Farrant Died 1915 Hms thunderer Royal Navy. AB on China war medal HMS Rosario. PO 1st Class on trio Drowned 1915 HMS Thunderer. On 6 February, 1915, Petty Officer 1st Class Alfred John Farrant was recorded as having drowned. He has no known grave, but is listed on East Budleighs village memorial and in the parish church of All Saints. He is also remembered on the Plymouth Naval Memorial. Petty Officer Farrant was 37 years old and left a widow, Gertrude, whose address was given as 16, Morice Square, Devonport. Known to his family as John, as is evident from the village memorial, he was the son of George and Emily Farrant, of East Budleigh; his father is recorded as a bricklayer.