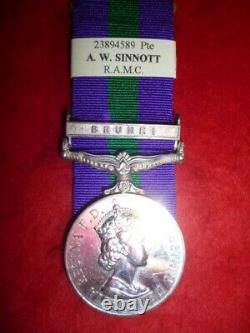 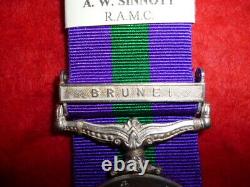 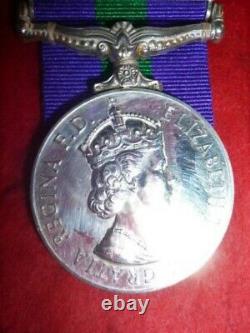 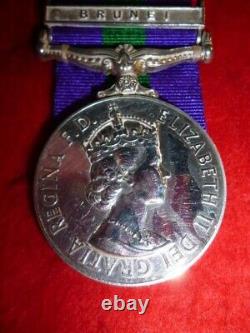 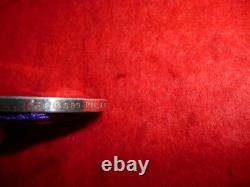 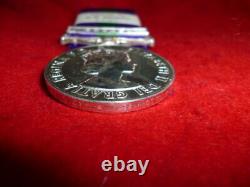 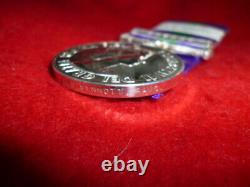 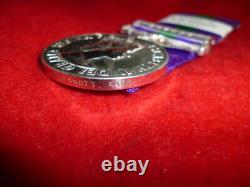 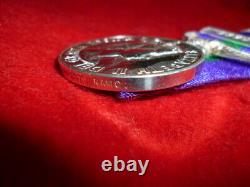 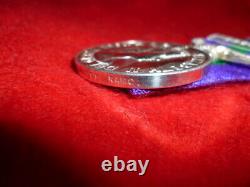 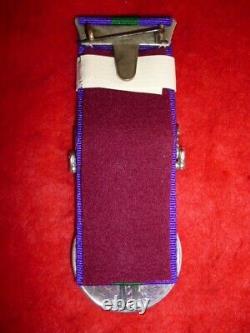 General Service Medal 1918-62, Clasp "Brunei" to Royal Army Medical Corps. Impressed naming to :- 23894589 Pte. Mounted as worn on pin-brooch. The Brunei revolt (Malay: Pemberontakan Brunei) was a December 1962 insurrection in the British protectorate of Brunei by opponents of its monarchy and its proposed inclusion in the Federation of Malaysia. The insurgents were members of the TNKU (North Kalimantan National Army), a militia supplied by Indonesia and linked to the leftwing Brunei People's Party (BPP), which favoured a North Borneo Federation. The TNKU began co-ordinated attacks on the oil town of Seria (targeting the Royal Dutch Shell oil installations), on police stations, and on government facilities around the protectorate.

The revolt began to break down within hours, having failed to achieve key objectives such as the capture of Brunei town and Sultan Omar Ali Saifuddien III. The revolt influenced the Sultan's 1963 decision not to join Malaysia. It is seen as one of the first stages of the IndonesiaMalaysia confrontation. Canadian residents must add GST. Many more similar items on our website.

The item "General Service Medal 1918-62, 1 clasp, Brunei to Royal Army Medical Corps" is in sale since Tuesday, June 2, 2020. This item is in the category "Collectibles\Militaria\WW I (1914-18)\Original Period Items\Great Britain\Medals, Pins & Ribbons". The seller is "arcticmedals" and is located in Calgary, Alberta. This item can be shipped worldwide.