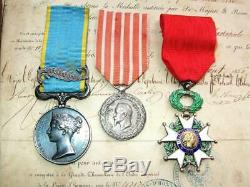 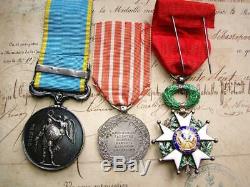 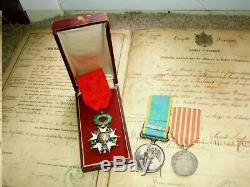 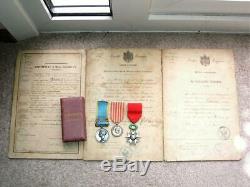 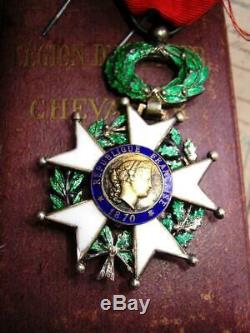 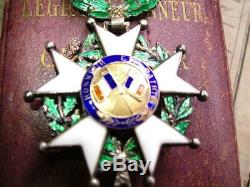 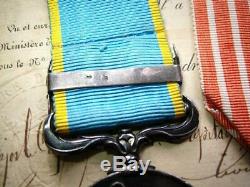 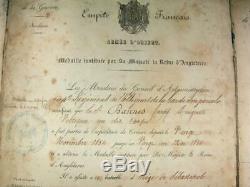 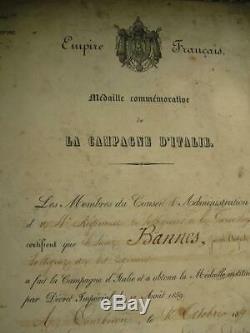 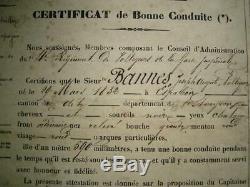 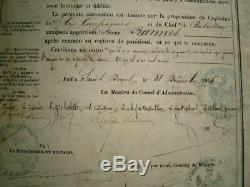 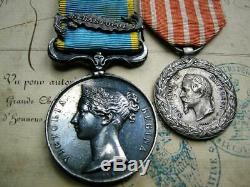 Released from service on December 31, 1866, received a certificate of good conduct. Campaigns: Crimean war from June 21, 1854 to June 23, 1856 , Italy from May 2 to August 4, 1859. Injured in the thigh by shrapnel and severe contusion in the right wing at the siege of Sevastopol on May 3, 1855. An office boy employed at the gas company (Xth section) since 1866, resides in Paris in 1890 and awarded the cross of the Legion of Honour Chevalier, a high honour for service above and beyond the call of duty.

The 80th line infantry were invovled in the attack and capture of the Central Bastion September 1855, the 80th was under the command of General. Monsieur Bannes distinguished himself during the battle, wounded by shrapnel, but as a result of his performance he was promoted April 1856 to join the " Imperial Guard", one of the 4th Regiment "Voltigeurs", hand picked men from the ranks, used as skirmishers and sharpshooters, their name came from the Napoleonic wars where they were sent into action by "vaulting" up onto the back of cavalry horses (allegedly an idea of Napoleon Bonaparte). This was employed with limited success, very difficult vaulting onto a horse with weapons and kit without falling off!

The name Voltigeurs stuck, they were usually veterans, more experienced fighters sent in to fight hand to hand, harrass the enemy (sharpshooters) and often used for reconnaissence duty. CRIMEA WAR ANGLO FRENCH FORCES ENGAGING THE RUSSIANS SEBASTOPOL 1854-56. The Crimean War was a military conflict fought from October 1853 to February 1856 in which the Russian Empire lost to an alliance of the Ottoman Empire, France, Britain and Sardinia.

The immediate cause involved the rights of Christian minorities in the Holy Land, which was a part of the Ottoman Empire. The French promoted the rights of Roman Catholics, while Russia promoted those of the Eastern Orthodox Church. The longer-term causes involved the decline of the Ottoman Empire and the unwillingness of Britain and France to allow Russia to gain territory and power at Ottoman expense.

It has widely been noted that the causes, in one case involving an argument over a key, have never revealed a "greater confusion of purpose", yet led to a war noted for its "notoriously incompetent international butchery". The Allies had had time to consider the problem, the French being brought around to agree that the key to the defence was the Malakoff. Several weeks of fighting saw little change in the front line, and the Mamelon remained in Russian hands.

In April 1855, the allies staged a second all-out bombardment, leading to an artillery duel with the Russian guns, but no ground assault followed. On 24 May 1855, sixty ships containing 7,000 French, 5,000 Turkish and 3,000 British troops set off for a raid on the city of Kerch east of Sevastopol in an attempt to open another front on the Crimean peninsula and to cut off Russian supplies. When the allies landed the force at Kerch, the plan was to outflank the Russian army. The landings were successful, but the force made little progress thereafter. Many more artillery pieces had arrived and had been dug into batteries.

In June, a third bombardment was followed after two days by a successful attack on the Mamelon, but a follow-up assault on the Malakoff failed with heavy losses. The resulting Battle of Tchernaya was a defeat for the Russians, who suffered heavy casualties. For months each side had been building forward rifle pits and defensive positions, which resulted in many skirmishes. Artillery fire aimed to gain superiority over the enemy guns. September saw the final assault on 5 September, another French bombardment (the sixth) was followed by an assault by the French Army on 8 September resulting in the capture of Malakoff by the French, and following the failure of the Russians to retake it, the collapse of the Russian defences.

Meanwhile, the British captured the Great Redan, just south of the city of Sevastopol. The Russians retreated to the north, blowing up their magazines, and the city fell on 9 September 1855 after a 337-day-long siege. At this point, both sides were exhausted, and no further military operations were launched in the Crimea before the onset of winter. The main objective of the siege, the destruction of the Russian fleet and docks, took place over winter. On 28 February 1856, multiple mines blew up the five docks, the canal, and three locks. Commemorative medal of the 1859 Italian Campaign. Médaille commémorative de la campagne d'Italie de 1859. Was a French commemorative medal established by Napoleon III, following the 1859 French Campaign in Italy during the 2nd Italian war of Independance. Early in 1815, there was a powerful popular movement in favour of national unification throughout Italy. This idea, championed by the King of Sardinia Victor Emmanuel II, was opposed by Pope Pius IX and the Austrian Empire who occupied the provinces of Lombardy and Veneto.

In Europe, Italian unification was only supported by Emperor Napoleon III of France who, on 28 January 1859, based on the clauses of the Treaty of Turin, decided to bring aid and support from France. Piedmont being invaded by 100,000 Austrian soldiers on April 26, 1859, France declared war on the Austrian Empire on May 3, 1859.

In spite of the lack of preparation of the French army, the soldiers, alongside their Piedmont and Sardinian allies were to illustrate themselves in several famous battles, including that of Magenta on June 4th, which allowed Napoleon III and Victor Emmanuel II to enter triumphantly in Milan on 8 June. Then, on June 24, the Franco-Piedmontese forces took the village of Solferino after a terrible battle culminating in an armistice signed at Villafranca on July 12. The French forces, composed of an army of 120,000 men, were commanded by the Emperor and placed under the orders of Marshals Achille Baraguey d'Hilliers and Francois Certain de Canrobert, Generals Patrice de Mac-Mahon, Adolphe Niel and Auguste Regnaud De Saint-Jean d'Angely.

During the three-month campaign, French losses amounted to 8,000 dead and 40,000 wounded. To reward all participants and ensure the memory of this glorious military campaign, the Commemorative Medal of the Italian Campaign was created by Imperial Decree on August 11, 1859. Nearly 120,000 medals were awarded to reward all soldiers and sailors who participated in the Italian campaign of 1859. Please check full description and pictures for condition, antique items and not new, showing signs of use and wear expected with age.

The item "Imperial Guard J A Bannes wounded 1855 Crimea Italy 1859 & Legion Honour medal" is in sale since Sunday, March 22, 2020. This item is in the category "Collectables\Militaria\19th Century (1800-1899)\Medals/ Ribbons". The seller is "theonlineauctionsale" and is located in Offchurch Leamington Spa. This item can be shipped worldwide.