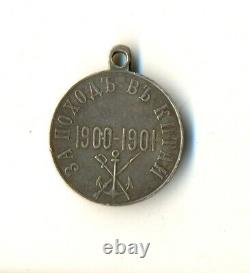 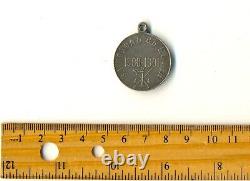 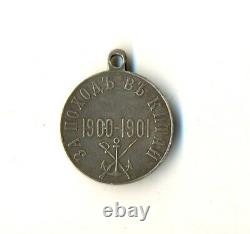 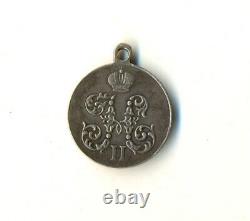 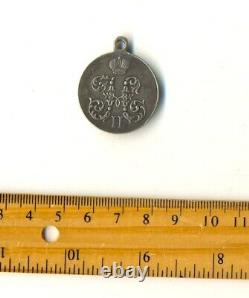 The medal "For the campaign in China" - the state award of the Russian Empire. The establishment of this award is connected with the participation of Russia in the suppression of the Ichetuan uprising in China. Medal "For the campaign in China" - a medal of the Russian Empire for rewarding the military , who participated in suppressing the Ihetuansky uprising in China (also known as the boxers' uprising), as well as for rewarding medical personnel, officials and priests in the service, officials of the security service of the Chinese Eastern Railway and South Korean Railway volunteers. Established May 6, 1901 by decree [3] ofEmperor Nicholas II. The decree was given to the Minister of War A. The medal had two main variants made of different metal: silver orbronze [4] [5] [6].

In addition to regular military personnel, volunteers, railroad guards, as well as priests, doctors and officials who served in military units were awarded. The light bronze version of the medal was relied upon by all military men who did not directly participate in the battles, but who were in the service in the active armies in China, as well as in areas in which martial law was declared. Similarly, with the silver version of the medal, in addition to the military, officials, volunteers, priests, doctors were awarded, if these persons were on duty in the service of the troops, medical institutions, and so on [4] [5]. Please carefully review the attached photos, if you need any additional photos please contact me. Pay Pal only Thank you. The item "Imperial order Russian Silver medal For the campaign in China silver (#1162)" is in sale since Thursday, February 7, 2019. This item is in the category "Collectibles\Militaria\WW I (1914-18)\Original Period Items\Russia". The seller is "redmedals" and is located in San Francisco, California. This item can be shipped worldwide.