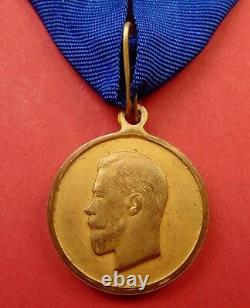 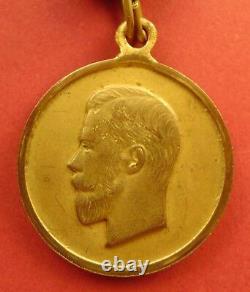 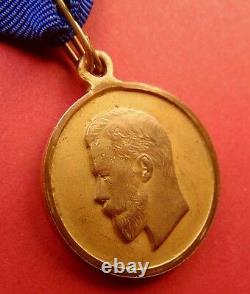 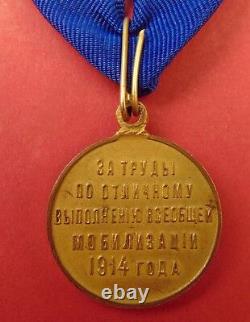 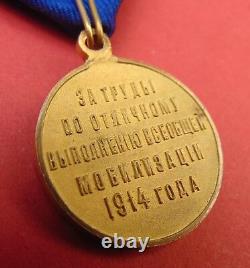 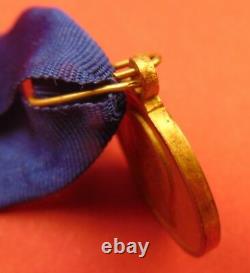 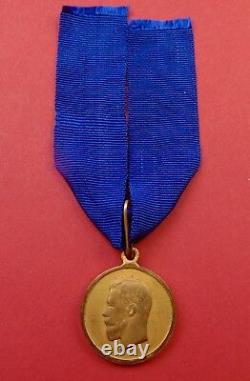 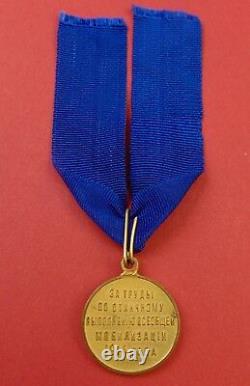 Medal for Efforts in General Mobilization of 1914. Made in Brass with Gilt finish, measures 27.9 mm wide; weighs 11.3 grams not including the ribbon and connecting link.

This high quality version of the medal was made by a private maker. It features deeply recessed field and the portrait of Emperor Nicholas II in high profile and very nicely detailed.

The medal is in SUPERB condition. The original fire gilt is very nicely preserved having only mild toning on the raised parts such as the border, bas-relief portrait and the lettering on the reverse - which makes them stand out and adds character. The raised details are extremely well-preserved and crisp. Comes on a relatively recent ribbon of the Order of White Eagle with a replica connecting loop of the kind traditionally used with Russian Imperial medals.

February 1915, this is the last award medal of the Russian Empire. It was issued to both the military and civilians who had assisted in the general mobilization of 1914 and in the effort to rush the supplies to the frontlines. Starting from 1915, the medal was also awarded for significant contribution to physical training of the youth of pre-draft age. Swift mobilization of the immense Russian force in the summer of 1914 came as a surprise to Russia's WW 1 Entente allies and a shock to her German and Austrian foes. Contrary to the Schlieffen Plan, the German high command was compelled to transfer troops from the all-important right wing of their western invasion force - thus losing a very real chance of quick victory in Western Europe and dooming Germany to a prolonged war of attrition that it could not win. Arguably, the speed of Russian mobilization was the decisive factor that saved Britain and France from the immediate defeat in 1914.

But it could not save Russia herself: throwing undersupplied and poorly prepared troops into hasty offensives led to devastating military defeats in East Prussia and put Russian Empire firmly on the road to the eventual military and political collapse in 1917. /Photos and history of the medal are available in the book "The Orders, Medals and History of Imperial Russia" by Prince Dimitri Romanov pp. The item "Imperial Russia WW1 MOBILIZATION MEDAL Nicholas II Last Award of Russian Empire" is in sale since Thursday, October 18, 2018.

This item is in the category "Collectibles\Militaria\Surplus\Medals, Pins & Ribbons". The seller is "collectrussia" and is located in Tenafly, New Jersey. This item can be shipped to United States.