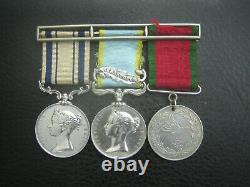 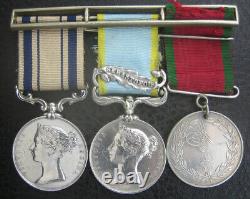 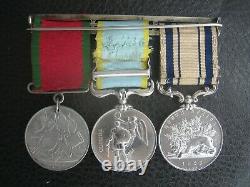 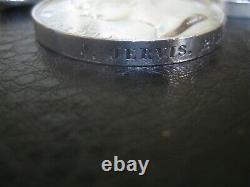 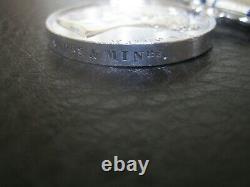 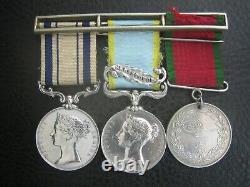 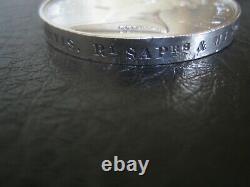 AN IMPORTANT SOUTH AFRICA AND CRIMEA GROUP TO A ROYAL SAPPERS AND MINERS WHO TOOK PART IN CAPTAIN SMITHS RELIEF OF PORT NATAL AND SUBSEQUENT DISASTROUS BATTLE OF CONGELLA BATTLE FOUGHT AGAINST THE BOERS ON 24 MAY 1842 SOUTH AFRICA 1834-53 J. CRIMEA 1854-56, 1 CLASP, SEBASTOPOL, UNNAMED; TURKISH. John Jervis was born in 1818 in the Parish of St Marys.

And from this time on the musters record him as being on Special Service. He thus accompanied Captain Smith in April 1842 on his epic 600 mile overland trek from.

To the relief of the 27th Regiment, besieged at that place after their defeat in action with the Boers. This ultimately led to the forming of the Colony of Natal. 1 Officer and 7 men of 10 Coy took part in the disastrous battle of Congella; 24 May 1842 and the subsequent siege. It is unconfirmed whether Jervis was one of the 7 as musters just confirm Port Natal.

However as the history of the Sappers and Miners states only under 8 Sappers Lieut Gibb, had accompanied Captain Smith to Port Natal in April, its almost certain he was at this important battle against the Boers. And the battle of Conella From The History of the Royal Sappers and Miners. In January, 1842, a small force under the command of Captain Smith, 27th regiment, was sent to the Umgazi, about ten miles south of the Umzimvooboo, to watch the movements of the Boers, who had attacked a native chief in alliance with the colonial government. With this force was detached a party of eight royal sappers and miners under Lieutenant C. There the expedition was encamped for a season, when a portion of it, on the 31st March, quitted the Umgazi for.

Taking with them seventy wheeled carriages and numerous oxen. The sappers took the lead of the column to remove obstructions on the route. The force comprised about 250 men, chiefly of the 27th regiment, and a few artillerymen. A distance of more than 600 miles, the greatest difficulties were encountered. Much of the ground traversed was very marshy.

Rivulets and larger streams were so much increased by the rains that the broken drifts across them had frequently to be renewed or repaired after one or two waggons had crossed. Several very steep hills had to be surmounted, one of which was the Umterda, over which the hunter and trader had never attempted to take his waggon without first dismantling it, and then carrying it up or down. Up this rugged hill, formed of huge boulders of granite imbedded in a swamp, a rough road was constructed; and by putting three spans of oxenthirty-six bullocksto each waggon, all, after three days' heavy labour and fatigue, were got to the summit.

Constantly in their progress, they had to improve the roads, to cut through wood and bush, to toil along the sand on the shore, and occasionally, harnessing themselves with ropes, drag the unwieldy train along wild passes and almost impenetrable tracts of fastness. At length, after a most harassing march of six weeks, of straining energy and arduous exertion, having crossed one hundred and seventy-two rivers and streams, much of the journey under violent rain, and often sleeping at night on the swampy ground, the troops reached Natal on the 3rd May, and encamped at the head of the bay; from whence they afterwards removed to the Itafa Amalinde, where they intrenched themselves, and placed beyond the parapet, for additional protection, the waggons which accompanied the force.

The Boers were opposed to the presence of the troops, and desired them to quit the country. This was unheeded by the English commandant, and hostilities at once commenced. On the night of the 23rd May, Captain Smith, in command of a portion of his force, left the camp and attacked the Boers at Congella, taking with him seven sappers and miners, armed and carrying tools.

When the enemy opened fire, the troops were in file up to their knees in water. Private Burridge fired the first shot in the engagement. More than an hour the contest continued without any one being able to take a direct aim; and, when the troops commenced the retreat, they were up to their armpits in water.

Here a sergeant of the 27th was shot, who would have been carried away in the receding tide, had not sergeant Young with two of the sappers, brought him across the 386bay to the camp, where his remains were interred. Private William Burridge was wounded in the knee. On regaining the camp all were served out with fresh ammunition, and, when about to lie down, the Boers attacked the position and only retired at daylight in the morning.

During the action half of the pole of the sappers' tent was carried away by a shot, and the waggon in their front was pierced by eleven balls. Private Richard Tibbs on this occasion received three balls in his clothes and was wounded. Soon afterwards (31st May) the Boers, comprising a force of about 1200 men and nine guns, commenced to besiege the camp.

This they continued with vigour till the 26th June, when a reinforcement having reached the cantonment from the frontier, hostilities ceased. Throughout the operations the eight sappers were employed superintending the execution of such works as the circumstances of the siege rendered indispensable. These included a redoubt, to preserve the communication with the port and village, and a magazine.

They also assisted in constructing a large kraal of stakes and abattis, for the safety of the cattle. The waggons were likewise drawn closer in, to make the defence more compact; and from a trench, dug on the inside, the earth was thrown under the body of the waggons, which were thus imbedded in the parapet. By this means the troops were enabled to fire over the parapet and underneath the bed of the waggons; and by leaving traverses in the line of trench, the camp was protected from enfilade. Daily the sappers were occupied in repairing the earth-works, and almost unassisted, built a battery for an 18-pounder gun in the south angle of the intrenchment. Sergeant Young, under Lieutenant Gibb, was the executive non-commissioned officer in conducting the field-works, and twice every day he went round the trenches, reported what was necessary to strengthen the defences, and carried out the directions of his officer.

On the night of the 8th June, sergeant Young and three sappers carrying their arms and intrenching tools, accompanied the sortie to the Boers' trenches under Lieutenant Irwin, 27th regiment. The enemy retreated and the trenches were destroyed. 387On the 18th following three sappers were present in a second sortie under Lieutenant Molesworth of the 27th, and led the column to the points of attack. Among the latter was private Richard Tibbs of the sappers.

During the siege, private John Howatson had made some wooden cradles for surgical purposes, and on finishing one, begged the doctor to look at it. Both stooped to do so, when a 6-pound shot passed within a few inches of their heads and whizzed by the rest of the party in the trench. When Lieutenant Gibbs servant was killed, corporal Deary and private Burridge buried him outside the waggons, and the melancholy service was not accomplished without much daring and danger. As the siege progressed provisions became scarce and the troops were put on the smallest possible allowance. Horses were killed and their flesh made into biltong. This, with a little beef, formed the daily repast of the camp; and in lieu of meal and biscuit, ground oats were issued. Upon this fare it was impossible to hold out more than fourteen days, but a strong reinforcement arrived on the 26th June, and effecting a landing, the Boers retreated with loss and haste from the beach and the trenches, and the siege terminated.

With the relief were three men of the sappers, who increased the strength of the. Party to eleven of all ranks. Lieutenant Gibb in his report to head-quarters praised sergeant Young, corporal Deary, and the detachment for their usefulness, alacrity, and cheerfulness; and Captain Smith in command, eulogized them for their uniform activity and readiness of resource in the presence of the enemy. He was always at his post and never found wanting; and I therefore beg to recommend him to notice as one of the best and most trustworthy non-commissioned officers I have met with during my long course of service. During the 3rd Kaffir War, Jervis was present at the battle of the.

On 13 June 1852, when his Company were acting as escort to a supply convoy of 9 ox-drawn wagons to. When attacked by a large force of enemy, the lead oxen were killed in their tracks, bringing the convoy to a halt with the pass being too narrow to permit turning the wagons about.

They were forced to abandon their wagons to be looted by the enemy. In their fighting retreat out of the pass, the escort lost nine men killed and three wounded whilst safeguarding the soldiers wives and children who were travelling with the convoy. Mounted as worn on a triple ribbon brooch bar, contact marks, otherwise NVF. If you have any questions and require more images please get in touch and. This will generally be a Wednesday or Thursday, so please bear with me if it takes a few more days to get sent.