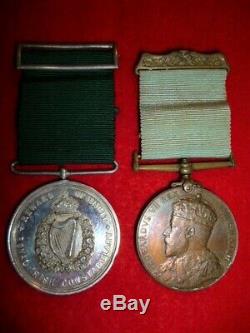 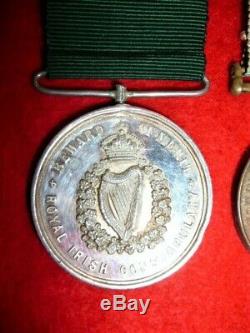 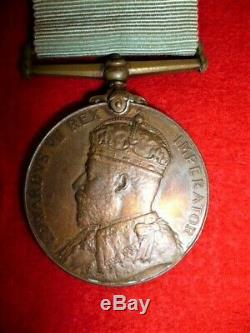 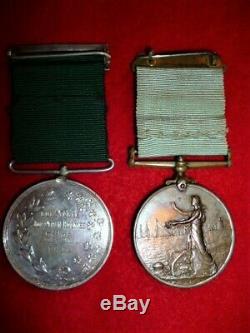 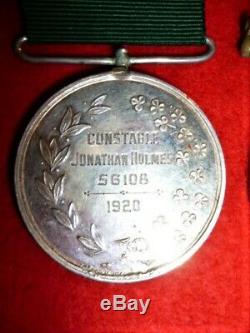 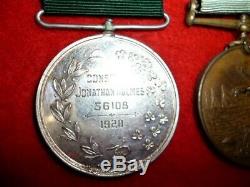 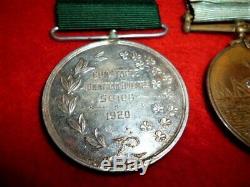 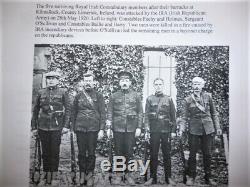 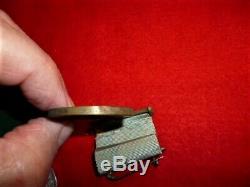 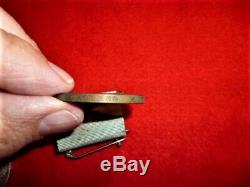 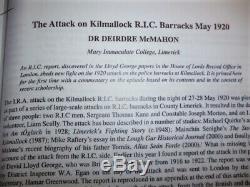 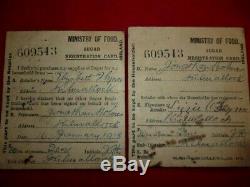 On Visit very small edge knock on Constabulary, large edge knock on C of RIC on Visit, otherwise good very fine to extremely fine, Constabulary with buckle mounting bar, Visit medal with the correct Shamrock top bar. On the night of 27th/28th May 1920, approximately 100 plus IRA volunteers were involved in the operation to attack the Kilmallock Barracks in Limerick, which was defended by 10 policemen. The barracks was a substantial single floor structure in the centre of the town with steel shuttered windows with firing slits. Its weakness was that it was overlooked by several 2 story buildings, Clery's Hotel, a bank and a grocers. The IRA occupied these 2 storey buildings with 30 men detailed with the actual assault before any firing had commenced.

The attack commenced with the IRA throwing several 56 lb weights from the higher buildings to crash through the barracks roof, immediately followed by a torrent of incendiary and petrol bombs. By this action they eventually succeeded in setting the barracks roof ablaze in the hope it would force the Police to surrender. After 6 hours continuation fighting the barracks was a blazing furnace but the Police managed to withdraw to a small strongly protected building at the rear of the barracks where they continued to hold out.

With the likely arrival of police reinforcements, the IRA called off their attack which has succeeded in completely destroying the main barracks and killing 2 policemen and wounding several others, (including Holmes) for the loss of 1 man, Liam Scully and at least one other, (local rumours suggested eight killed and fifteen wounded). It is also possible that 5 or 6 R. Recruits who had wanted to surrender were burned to death in their cells after being locked up by Sergeant O'Sullivan. It is certain that the Constabulary Medal was issued for Constable Holmes's bravery in this action as all the defenders received the medal on the orders of the Prime Minister, Lloyd George who stated in the House of Commons on 10th June the gallant conduct of all members of the Royal Irish Constabulary in defending the barracks at Kilmallock...

Against a prolonged and determined attack by a large number of raiders, has been fully considered by the Constabulary Review Board. Each of the members of the force concerned has been awarded the Constabulary medal, which is only granted in cases of pre-eminent valour and bravery. " Quirke wrote that the Kilmallock garrison "fought the fight of heroes, and, although we were engaged in a life and death struggle with them, we readily acknowledge the magnificent stand they made in the face of an utterly hopeless situation. With a 1918 named Sugar Registration Ration card for Jonathan Holmes, Kilmallock. Various copied research including a copy of a photo showing 5 RIC survivors of the attack including a Constable Holmes. Jonathan Holmes was born in Sligo in 1874, enlisted in the R. In 1893, in the 1911 Census he, his wife and 5 children were living at 27 Wolfe Tone Street, Kilmallock with his occupation listed as R. Only 315 Constabulary Medals issued, so a scarce award for a major action. See also The Attack on Kilmallock R. Barracks May 1920 by Dr. Deidre McMahon, a photocopy of the article is included. Arcticmedals dot com (at better prices often). All items are unconditionally guaranteed as to authenticity.

We are members of The Orders & Medals Research Society, (OMRS), The Orders & Medals Society of America (OMSA), The Military Collectors Club of Canada (MCC of C) & The Canadian Society of Medals & Military Insignia (CSMMI). The item "Irish Gallantry Medal Pair to Royal Irish Constabulary, Limerick 1920" is in sale since Sunday, June 7, 2020. This item is in the category "Collectibles\Militaria\WW I (1914-18)\Original Period Items\Great Britain\Medals, Pins & Ribbons".