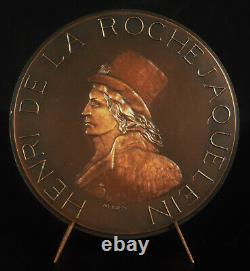 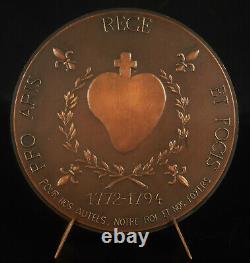 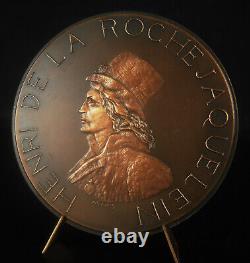 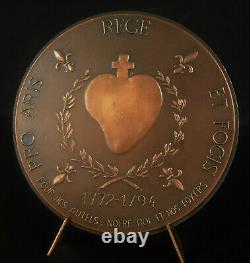 Hallmark on the edge (mark on the edge) : Cornucopia + copper + 1975 + 39 / 100. The stand is not for sale. Henri du Vergier, Count of La Rochejaquelein, born on August 30, 1772, at the Château de la Durbelière, near Châtillon-sur-Sèvre (Poitou), and killed on January 28, 1794, at Nuaillé (Maine-et-Loire), was one of the leaders of the catholic and royal army during the Vendée war, during the French Revolution. The French Revolution having surprised him from the age of sixteen, he did not follow his father in emigrating to Germany.

In 1791, he refused to take the oath that the Constituent Assembly required officers and resigned. He chose to defend the throne in the Constitutional Guard of King Louis XVI where he was called in 1791.

During the attack on the Tuileries Palace by the revolutionaries, he fought to defend the king, as second lieutenant of the Guard. This day of August 10, 1792 deceives his hopes2,3. The first uprisings We saw him, in fact, in Poitou, deploring the consequences of the first uprising in Bressuire, where the royalist peasants had just been defeated by the revolutionaries. La Rochejaquelein retired to the land of Clisson, near Parthenay, to General Louis de Sagères de Lescure, Marquis de Lescure, his relative and his friend: both united by the same feelings, of about the same age, having the same interests, they secretly aspire to the project of participating in the restoration of the monarchy which threatens to be ruined. They learned only by vague rumors of the new uprising of March 10 Mars 17933.

The monarchist uprising They wavered between hope and fear when a peasant from Châtillon came to La Rochejaquelein to announce that the inhabitants of the neighboring parishes, impatient to unite with the insurgents, were running to arms and asking him for their leader. Lescure wants to follow him. It is to deliver his parents, his friends and his young wife to the revenge of the republicans3. Accompanied by his faithful guide and armed with two pistols, La Rochejaquelein arrives in the theater of war and joins Charles de Bonchamps and Maurice d'Elbée. He learns that an enemy division is entering the Vendée, and, listening only to his courage, he wants to stop the offensive movement of the Republicans, He hastens to Châtillon, to Saint-Aubin-de-Baubigné, where the properties of his family. Hardly had it appeared that thousands of peasants from Aubiers, Nueil, Saint-Aubin-de-Baubigné, Echaubrognes, Cerqueux de Maulévrier, and Yzernay proclaimed him their chief. In Mars 1793, he took part in the Vendée uprising and became one of the leaders of the Vendée army.

La Rochejaquelein puts himself at their head and addresses them this short harangue: If my father were among us, he would inspire more confidence in you, for you hardly know me. Besides, I have against me both my great youth and my inexperience; but I already burn to make myself worthy of commanding you. Let's go find the enemy: if I advance, follow me, if I retreat, kill me, if I die, avenge me. » Vendée uprising Henri de La Rochejaquelein at the Battle of Cholet, October 17, 1793, painting by Paul-Émile Boutigny, Cholet History Museum. The Vendeans respond with cheers and march to the Republicans, whom they find entrenched in the Aubiers cemetery.

They invest the village and attack in skirmishers the division of General Pierre Quétineau. La Rochejaquelein persuaded them that the enemy, half defeated, was beginning to flee. Immediately the Vendeans rush on the Republicans, disperse them and seize their artillery. La Rochejaquelein marches instantly on Châtillon and Tiffauges.

There, meeting with the other royalist gatherings, he shared with them the ammunition which he had just removed, and, by a first success, raising his party, he inspired it with a new ardor. The defeat of Aubiers decided General Quétineau to evacuate Bressuire hastily, the Marquis de Lescure sent the order to more than forty parishes to take up arms5. The castle of Clisson instantly becomes a place of arms and fills with soldiers. Each gathering forms a separate body.

That of La Rochejaquelein most often met with the grand army of Anjou, which at that time amounted to barely 18,000 combatants, poorly armed and without a fixed organization3. On April 2, La Rochejaquelein took part in the battle of Beaupréau, following which the Republicans, driven back beyond the Loire, remained suspended. Battle of Cholet After the battle of Cholet, where Bonchamps also succumbed, La Rochejaquelein became the leader of the royalist party8. The torrent of fugitives carries La Rochejaquelein to Beaupréau. Having become the soul of his party, this young warrior sees himself engaged under these disastrous auspices in the crossing of the Loire, which he disapproves of. His first thought was to cover and ensure the retreat: he first left a strong rear guard at Beaupréau, ordered him to defend himself and then move quickly to the banks of the river3. On October 18, 80,000 fugitives reached Saint-Florent-le-Vieil to cross to the right bank. La Rochejaquelein and Lescure are obstinately opposed to this passage, or rather to this escape. Transmigration from the Vendée revived a royal army which, on October 19, found itself reunited in its entirety at Varades, on the right bank. Generalissimo The generals, no longer having either Bonchamps or d'Elbee, felt the necessity of giving themselves a commander-in-chief who had the general confidence. Lescure, mortally wounded, designates La Rochejaquelein as the only one capable of reviving the courage of the fighters of the Vendée. All the chiefs appoint him, unanimously, generalissimo. He was appointed General-in-Chief of the Catholic and Royal Vendée army. He was barely 21 years old. Expedition in progress When the plan of campaign had been drawn up in the councils, when it had been decided to attack Laval and Rennes first, the army pitched its tents. The entire army set out on October 20 for an expedition to the coasts of Brittany, where the English gave hope of help. It is decided that we will march3.

The vanguard is made up of 12,000 infantry, supported by 12 pieces of cannon, the best soldiers and almost all the cavalry form the rear guard; between these two bodies walks a herd of women, children, old people, which amounts to more than 50,00010. La Rochejaquelein passed the bulk of the skirmishers and two pieces of cannon in front and the baggage in the middle of the army. A republican body covers Laval.

At eight o'clock in the morning of the 22d, the general-in-chief ordered the attack to begin; the Republicans, shaken, are soon carried away by the fugitives; the Vendée cavalry completes the dispersal of everything3. Battle of Entrammes Main article: Battle of Entrammes.

He then takes the road to Dol instead of marching towards Rennes. From Dol, he advances on Pontorson and Avranches, in order to move on Granville, that the bulk of the army, forming about 30,000 men, attacks without success, the place is bristling with fortifications and defended by a garrison exalted and numerous. The Vendeans, discouraged, are on the eve of rising against their chiefs; crying out to return to their native country.

La Rochejaquelein recalls the detachments and resumes its march. By moving away from the shore, the royalists forever lose the opportunity of acquiring, by joining the English forces with them, the political and military consistency which can save them. The expedition commanded by Francis Rawdon-Hastings, thwarted by the winds, set sail too late. The distances, the elements and the defense of Granville cause the ruin of the royalists3. But their retreat to the Loire was marked by battles in which all their valor and the energy of their leaders burst forth.

Pontorson is first kidnapped after a great carnage. La Rochejaquelein then heads towards Dol, and finds on the two roads of Antrain and Pontorson two republican armies which are marching at full speed. This item is in the category "Coins & Paper Money\Exonumia\Medals".