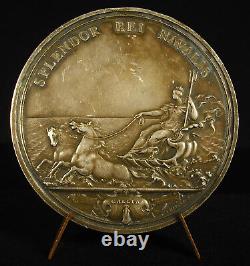 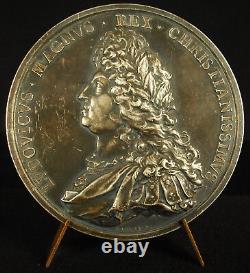 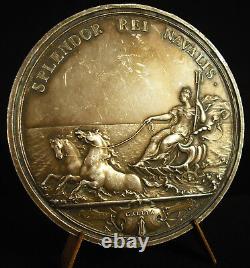 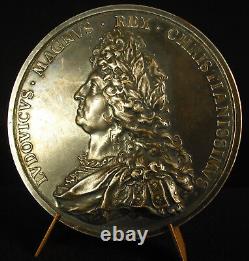 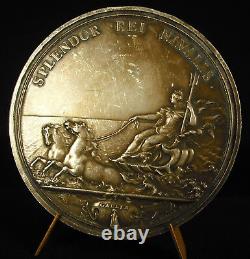 Medal in silvered bronze (silvered) from the Paris Mint (Cornucopia hallmark from 1880). Medal struck around 1900, re-strike of a model by F Mauger around 1700. To report some friction, small shocks, as well as a lack of silver cover on the edge Beautiful patina. Louis XIV, Tribute to the Navy.

Laureate, draped and cuirassed bust left. France seated, holding a trident, in a chariot going left over the waves. Engraver / Artist : F Mauger. Hallmark on the edge (mark on the edge) : cornucopia + bronze. The support is not for sale. This creation is the work of Richelieu. It is a difficult birth because the efforts are not regular. This young navy declines after the death of the cardinal before being reborn under Louis XIV thanks to the will of the main minister at the beginning of the reign: Colbert. To sustain its squadrons, the royal authority developed a veritable industrial tool which ranged from the military shipyard to the foundries of cannons and anchors, to the manufacture of sails, ropes and other apparatus, not to mention the contribution of almost all the kingdom's forests to provide timber for construction. A naval administration is set up to manage the arsenals, ensure supplies, register the sailors, while schools are created to train officers. The ports are profoundly transformed, such as Brest and Toulon, but also Marseille, Le Havre, Dunkirk, Lorient, Cherbourg. A port-arsenal was even created from scratch: Rochefort. This desire to assert itself at sea comes at a time when France, the most populous country in Europe at that time, is fundamentally defined by its agricultural wealth. Sailors were few in number, around 50,000, a figure that remained stable throughout the 17th century (and beyond).

The maritime world concerns only a fairly narrow coastal strip and public opinion prefers the "chicken in the pot", symbol of fat day, to fish, symbol of Lent. The interest of the kings of France is. To sustain its squadrons, the royal authority developed a veritable industrial tool which ranged from the military shipyard to the foundries of cannons and anchors, to the manufacture of sails, ropes and other apparatus, not to me. This item is in the category "Coins & Paper Money\Exonumia\Medals".