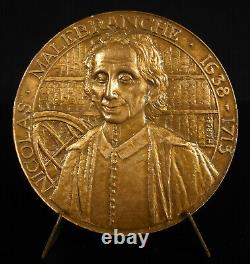 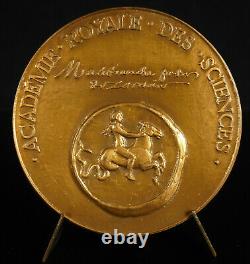 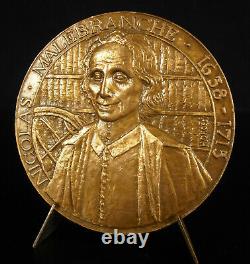 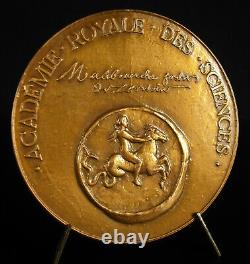 Bronze Medal, of the Monnaie de Paris (Cornucopia hallmark from 1880). Hallmark on the edge : cornucopia + bronze. Support is not for sale.

The stand is not for sale. Nicolas Malebranche, born in Paris on August 6, 1638 where he died on October 13, 1715 (same years of birth and death as the French King Louis XIV), is a French philosopher, Oratorian priest and theologian.

In his work, he is led to synthesize the thought of Saint Augustine and that of René Descartes. He also developed a deeply original thought, with a great conceptual unity, which integrated the new sciences of the time while wanting to conform to the dogmas of Christianity. By his spirit both innovative and synthetic, he manages to build a remarkable explanatory system which intends to solve all questions and all problems based on the idea of??

Malebranche is best known for his theses on the irretrievably fallen soul of man, the view of ideas in God and occasionalism, which together allow him to demonstrate the fully active role of God in every aspect of the world as well as the entire dependence of the human soul on Him. For Malebranche, there is nothing which, properly thought out, does not bring us back to God.

His philosophy is thus essentially religious, but with a marked rationalist character, because life according to reason is for him an integral part of life according to religion. By the height of his thought as by the nature of the theses he supports, Malebranche is sometimes nicknamed the Christian Plato.

But the theological and moral consequences implied by his writings lead to his doctrine being often severely judged by the clerics and laity of his time, Jansenists or Jesuits, some of whom attacked him with great violence, and succeeded in putting it down. Index some of his publications. The quality of his literary style is nevertheless recognized by all, being distinguished by the purity, the elegance and the clarity of the language, as well as by the abundance and the skill of his figures of speech. Today, Malebranche is considered in France as one of the greatest writers of his time, although the literary study of his work is neglected.

On the philosophical level, he is also qualified as "the greatest metaphysician that France has ever had" by the philosopher Étienne Gilson1. Even in the oratorian's time, Pierre Bayle considered his work to be "a work of a superior genius, and one of the greatest efforts of the human mind" 2. It is perceived from the 18th century as the last flash of lightning from the "French sky", preceding the eclipse of metaphysics during the Enlightenment. Nicolas Malebranche was born in Paris in the summer of 1638.

From a father treasurer of Richelieu, also adviser to the king3, he is the last of ten or thirteen children (the number varies according to the sources) and bears the same first name as his father. His mother is Catherine de Lauzon, whose brother was Viceroy of Canada and Councilor of State3. Due to a malformation of the spine, he took lessons at home until the age of sixteen and then studied at the College de la Marche where he obtained in 1656 the degree of master of arts at the University of Paris. He then studied theology for three years at the Sorbonne, although he hardly appreciated the methods of dispute3.

Appointed secretary to the king in 1658, Malebranche joined the Congregation of the Oratory in 1660, shortly after the death of his mother, then of his father, a few weeks apart. He was ordained a priest there in September 1664, the same year he said he had read with great enthusiasm Descartes' Treatise on Man, which had just appeared more than thirty years after its writing.

In 1699, as a physicist and mathematician, he became an honorary member (that is to say non-pensioner) of the Royal Academy of Sciences, which was then one of the greatest places for the development of knowledge, in direct competition with the Royal Society of London. From the 1660s, Malebranche spent most of his time in his cell at the Oratory in Paris, rue Saint-Honoré, where he remained for nearly fifty years without exercising a regular ministry3. He travels little and only makes two trips, one to Normandy in 1685 for a mission with the "new converts", and the other to Périgord in 1688.

But his writings are widely distributed across Europe and travel during his lifetime to China, where Jesuit missionaries reproduce them. Of fragile health, Malebranche suffers from permanent fatigue and is operated on several times for gallstones. Described as lonely, strange, meditative and pious, he composes his works in silence, sometimes retiring to one of the congregation's country houses to work more in peace3.

Essentially, his life merges with his activity as a philosopher, scholar and writer, nevertheless punctuated by many heated quarrels with those who criticize his theses3. Anecdotes that nothing attests are popularized by many biographers to ridicule the theses or the character of MalebrancheN 1. Thus, in favor of the thesis of animal-machines, Malebranche would have kicked the pregnant dog from the Oratory with a great kick on the pretext that "that [an animal] does not smell" N 2, and his only attempt at matter of poetry would have resulted in this simple couplet: "On this beautiful day it is the best weather in the world to go on horseback on earth and on the water" 4. According to another anecdote, Malebranche would have died as a result of the anger which seized him during a discussion with George Berkeley, passing through Paris, while he had hitherto said his aversion to the "argument" 4.

A mausoleum was erected in 1733 at Mesnil-Simon in Eure-et-Loir, in front of the Saint-Nicolas church Logo historic monument Classified MH (1963) 5. Doctrine René Descartes opened up in the 17th century the prospect of a new science and a new philosophy based on rationality. Metaphysical Metaphysics occupies a central place in Malebranche's thought.

It takes the place of the foundation at the same time of science, religion and morality. Inseparable from theology, Malebranche's metaphysics is theocentric, affirming the role of God as the only principle. God is interpreted there as a rational agent; he therefore did not choose the best of all possible worlds (as Leibniz maintains), but only the best possible world achievable by the simplest ways, the only ones worthy of the perfection of his being. Ideas as archetypes Very influenced by the Cartesian conception of knowledge, Malebranche considers the "clear and distinct idea" as the type of perfect knowledge6. But while Descartes, then Spinoza and the Cartesians, assert that any other kind of knowledge stems from an "obscure and confused idea", Malebranche innovates greatly on this point. For him, all that is not known by clear idea and di. From a father treasurer of Richelieu, also adviser to the king3, he is the last of ten or thirteen children the number varies according to the sour. This item is in the category "Coins & Paper Money\Exonumia\Medals".5" and is located in this country: FR.