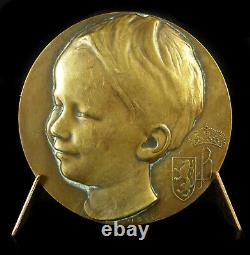 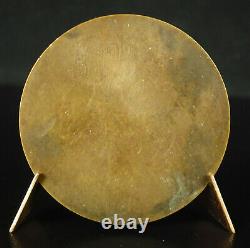 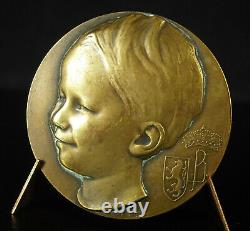 221-shot13 Uniface bronze medal, Belgium. Some traces of manipulation, oxidations on the edge mainly. Hallmark on the edge : no punch.

Support is not for sale. The stand is not for sale. Baudouin (in Dutch: Boudewijn; in German: Balduin), born September 7, 1930 at Stuyvenberg Castle and died July 31, 1993 in Motril, is the fifth King of the Belgians. He reigned from July 17, 1951 until his death. Second child and first son of Leopold III and Queen Astrid1, he bore the title of Count of Hainaut while his father was still Duke of Brabant, then became Duke of Brabant on the accession of Leopold III to the Belgian throne. He is the elder brother and predecessor of King Albert II and the younger brother of Grand Duchess Joséphine-Charlotte of Luxembourg1. His accession to the throne comes at a time of political crisis and his long reign is marked by many others, one of which was the result of the public expression of his Catholic faith.

His reign, of more than 42 years, is the second longest of the Belgian monarchy, after that of King Leopold II. Birth and family Prince Baudouin was born on September 7, 1930 at Stuyvenberg Castle, near Laeken, in Brussels, Belgium.

He is the second child and eldest son of Prince Leopold, Duke of Brabant, and his first wife, Astrid of Sweden. Her paternal grandparents are the very popular King Albert I and Queen Elizabeth. Heir to the throne Portrait of Queen Astrid, mother of Baudouin. In 1934, his grandfather, an avid mountaineer, tragically died in a climbing accident in the Meuse valley. His father then became King of the Belgians, under the name of Leopold III, and Baudouin thus became the heir to the crown. On this occasion, he received the title of Duke of Brabant. The following year, Baudouin's mother died in a car accident.

Then, World War II broke out. It is first experienced in a brief exodus. This begins in La Panne2 and continues in France, at the Château de Montal, then, after the French defeat, in Spain because King Leopold III wanted to remove him, with his brother Albert and his sister Joséphine-Charlotte, from the German invasion of Belgium by evacuating them under the leadership of trusted people, but without Juffrouw (Mademoiselle), the governess to whom Baudouin was particularly attached2. Baudouin and his younger brother, Albert, in 1940. Repatriated to Brussels, the royal children spent four years there during which the king's second wife, Lilian Baels, made princess of Réthy, took care of them affectionately3 and ensured that they had a life more in keeping with that of the children of the bourgeoisie.

Necessary than that which their fathers, grandfathers and great uncles had known. Baudouin, whom she familiarly calls Baud3, studied either at the Château de Laeken or at the Château de Ciergnon. He was educated on the shores of Lake Geneva at the Institut Le Rosey in Rolle (Switzerland)4.

His education during this period was supervised by the Dominican Father Antoine Braun5 who later became his chaplain. Just after the landing, the royal family, which grew with the birth of Alexander of Belgium, was taken by the Nazis to Germany in the fortress of Hirschstein, then to Austria, to Strobl, where it was released on May 7. Then begins the "royal question". Baudouin attended the Collège de Genève (today known as the Collège Calvin); he accompanied his father and stepmother on a long trip to the United States in 19482. King of the Belgians The Royal Question Related article: Royal question.

A bust of the young King Baudouin6. Pending the end of the debates, Prince Charles-Théodore, brother of Leopold III, is appointed Regent of the kingdom until further notice. In 1950, after the popular consultation which gave very different results in Flanders and Wallonia or, more precisely, between the urban and rural electoral districts. Which corresponds to a delegation of powers.

Indeed, a regency and the title of regent were impossible since the law on the end of the impossibility of reigning of King Leopold III had been voted by the Chambers. The prince takes an oath to respect the Constitution and the laws of the Belgian people before the assembled Chambers.

It was during this ceremony that the cry Vive la République! Attributed to Julien Lahaut who was assassinated seven days later. Accession to the throne Following the abdication of his father on July 16, 1951, Baudouin, according to the Major Constitution, became the fifth King of the Belgians on July 17, 1951, when the second school war was raging.

Beginning of reign For more than 10 years, the young king was under the strong political influence of his father and his stepmother, going so far as to refuse to shake hands with those who, like Hubert Pierlot, had opposed Leopold III during the war7.8. A year after his marriage, Baudouin chose to move away; he will only meet his father and his stepmother on rare occasions, in particular after the death of Queen Elizabeth in 19653. Black and white photo; the king and queen, wearing a hat and carrying a bouquet of flowers, are particularly smiling. The Queen accompanying the King on a trip to GermanyState funeral The funeral took place on August 7, 1993 in the Cathedral of Saints-Michel-et-Gudule in Brussels during a celebration of glory and hope requested by his wife, who attended dressed in white, the color of the resurrection and the color of mourning for Catholic queens.

The ceremony is broadcast live on a giant screen installed on the Grand-Place in Brussels and by numerous television stations around the world. It brings together a large number of heads of state from around the world: from Queen Elizabeth II of the United Kingdom to Emperor Akihito of Japan, including French President François Mitterrand. A second service is celebrated for the family in the Notre-Dame de Laeken church before the body is lowered into the royal crypt to rest near the previous Belgian kings and queens. National mourning ends on August 9, 1993, after Albert II takes the constitutional oath.

For a few weeks, the Belgians found themselves reunited by the disappearance of a man symbolic representative of the collective consciousness and identity of Belgium13. In December 2005, he was voted 2nd greatest Belgian of all time by the public of RTBF.

A long reign King Baudouin (right) with Heinz Kühn visiting Düsseldorf at Benrath Palace (1971) - photo: German Federal Archives. Belgium is a parliamentary monarchy. The Constitution gives the king the power to refuse to validate a law. The king can only publicly express an opinion with the agreement of the government. He appoints and dismisses ministers; even if it needs the approval of at least one minister and a vote of confidence in parliament, this allows it to play a major role after each election and during ministerial crises. King Baudouin had a definite influence on the successive governments during his forty-two years of reign. King Baudouin acquired an experience superior to that of many ministers in successive compromise governments during his long reign, many of whom only remained ministers for a few years when Baudouin reigned for 42 years. This reign constitutes, for the Belgian State, a cornerstone which allows the king to have ascendancy over his ministers, even to "soap their ears royally"14. It constitutionally defends the unity of Belgium14, but cannot prevent quarrels between four linguistic regions and between three communities. Under his reign, from reform to reform of the State, Belgium became a federal State. Internationally, the reign was marked by the creation of the ECSC in 1951 and the European Economic Community in 1957, the Universal Exhibition in Brussels in 1958 and the independence of the Belgian Congo and Ruanda-Urundi. Beyond the appearances of reserve required by his status, King Baudouin was very concerned about understanding between men and peoples. His many official visits abroad, as well as the many official visitors he received during his reign, were an opportunity for him to reveal a lofty view and a political talent that many of his interlocutors discovered with astonishment and to which they testified. At the announcement of his death ref. Belgian Congo In 1955, warmly welcomed by the local populations, Baudouin made a triumphant tour of the Belgian Congo, visiting all the regions of a. This begins in La Panne2 and continues in France, at the Château de Montal, then, after the French defeat, in Spain because King Leopold III wanted to remove him, with his brother Albert and his sister Joséphine-Charlotte, from the German invasion of Belgium by evacuating them under the leadership of trusted people, but without Juffrouw (Mademoiselle), the governess to wh. This item is in the category "Coins & Paper Money\Exonumia\Medals".5" and is located in this country: FR. This item can be shipped worldwide.