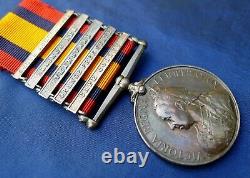 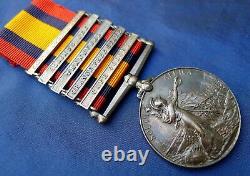 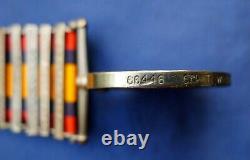 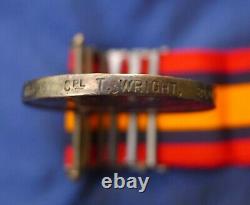 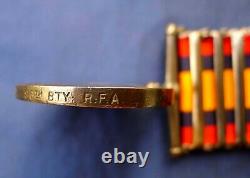 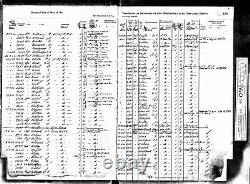 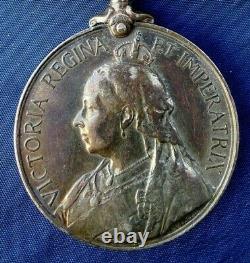 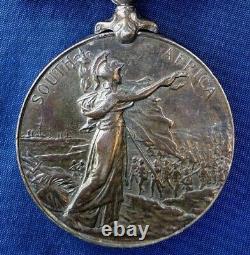 86th (Howitzer) Battery, Royal Field Artillery. Wright was Discharged as'T of E' January 1902. The Queen's South Africa Medal (QSA) was the campaign medal issued to all who served in South Africa up to the end of the South African or'Boer War' up to May 1902. The medal was awarded to military personnel in a wide variety of units other than Regular Army and Imperial Yeomanry who served in the Boer War in South Africa between 11th October 1899 and 31st May 1902. Units from the British Army, Royal Navy, colonial forces who took part (Australia, Canada, New Zealand, India and South Africa), Nursing staff, Railway staff, Irregulars and Town Guards, the Balloon Section of the Royal Engineers, Veterinary staff, civilians employed in official capacity and war correspondents. The QSA (without bar) was also awarded to troops who guarded Boer prisoners of war at the POW camp on the island of St. Troops on the Mediterranean islands were awarded the Queen's Mediterranean Medal, and some eligible personnel on troopships earned the Transport Medal. The medal was also issued to the New Zealand 10th Contingent and some British Imperial Yeomanry units who arrived in Durban in May 1902 and did not fight. No cut price rates'at your own risk'. Coins used in the photos with the item are to show scale and are not included in the sale. Guarantee: As with all my artefacts, this lot is guaranteed to be original and as described. Nearly all of the items offered are from years of accumulating and acquisition.

This item is in the category "Coins\Exonumia\Medals". The seller is "shed_finds" and is located in this country: AU. This item can be shipped worldwide.