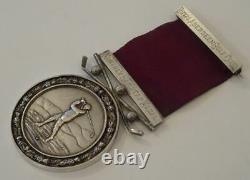 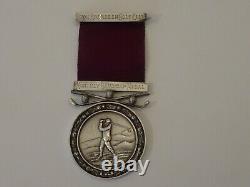 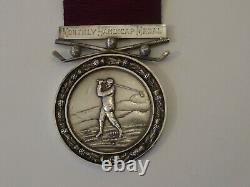 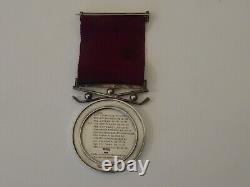 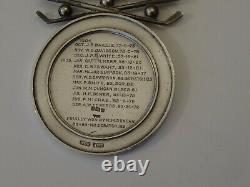 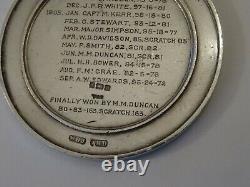 It is also hallmarked with the maker's mark W. " for William George Jamieson alongside "ABD the town mark for Aberdeen. The central disc with the winner's names also hallmarked by Vaughton & Sons, Birmingham. This large silver medal measures 2 1/4" inches (58mm) in diameter and is complete with the original ribbon with silver suspender clasps "Royal Aberdeen Golf Club" and "Monthly Handicap Medal. Royal Aberdeen Golf Club is one of the oldest Golf Clubs in the world, it was founded in 1780 as The Society of Golfers at Aberdeen.

Mr Duncan of Aberdeen Golf Club remained the Secretary to the Delegates for the next twenty one years, after which he was presented with a silver cigar box, in recognition of his service, bearing the inscription'Presented by the Golf Clubs in the Northern Counties, comprising Aberdeen, Banff, Caithness, Inverness, Kincardine, Moray and Nairn, Orkney and Shetland, Ross and Cromarty, and Sutherland to M M Duncan, Esq, in token of their appreciation of his 22 years of secretaryship to the Delegates on the Northern Counties Cup competition and for his outstanding services to the game of golf in the North, 22nd July, 1921. Thank you for viewing this listing from dev eronjewellers. We have an interesting stock of antiques and collectables, including pocket watches and wristwatches, jewellery and silver, coins and medals.

Please follow us on social media. The item "RARE ANTIQUE, SCOTTISH SILVER MEDAL, ROYAL ABERDEEN GOLF CLUB, MONTHLY MEDAL" is in sale since Thursday, July 22, 2021. This item is in the category "Sports Memorabilia\Golf Memorabilia\Other Golf Memorabilia". The seller is "deveron_jewellers" and is located in Scotland. This item can be shipped worldwide.