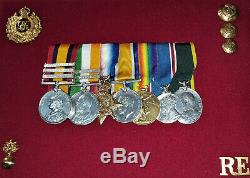 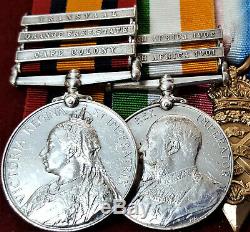 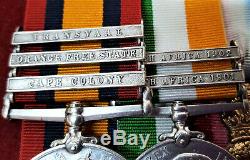 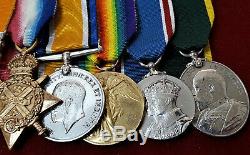 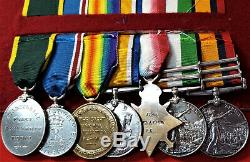 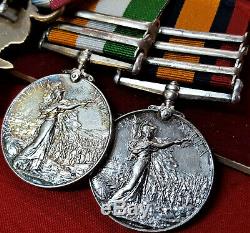 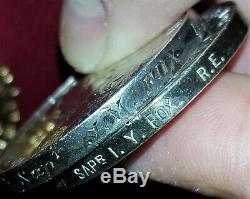 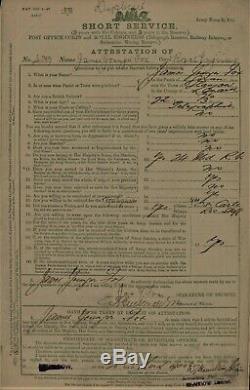 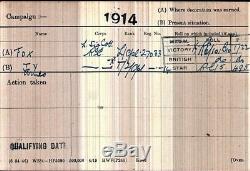 Offered is a group of 7 medals to Cpl J. Fox who served in the Boer War with the Telegraph Division, who subsequently served with the 8.

With extensive research on R. Was born in Govan, Glasgow in 1878. He enlisted into the regular army serving with the Royal Engineers at Glasgow 20/3/1900 for a limited period of engagement for the Boer War. He was serving with the 24. E (territorial) battalion the time with his occupation recorded as Telegraphist and was given the regimental number of 4387.

Transferred to the Army Reserve 14/5/1903. On the 1/4/1910 he was awarded the Territorial Efficiency Medal whilst posted to the 1/8th (City of London) Battalion (Post Office Rifles) with a regimental number of 6499. Called up for training Telegraph Coys R. All training re call served with the 1.

During WW1 he served with the Royal Engineers in a signals capacity. He was probably mobilised due to his speciality of Air lines and as a qualified telegraphist. He landed in France on the 17/8/1914 with a new regimental number of 27033.

Upon mobilisation, the BEFs Signal Service numbered 75 officers and 2,346 other ranks, comprising 29 units in all. The 1914 Star roll that Fox is on was compiled from L Signal Company Allotted to Inspector General of Communications HQ (5 Officers, 263 Men). "L" Corps Signal Company 11 Corps February 1915 to 28 September 1918. He survived the war and died 15/2/1956.

The Telegraph Battalion during the Boer, War (18991902). Up until the Boer War communication practice had often been rudimentary and extemporised, in part a reflection of the limited scale of the armys colonial campaigns and its relatively ill-equipped and technically inefficient opponents. The conflict in South Africa, however, provided the British Army with its first taste of a more modern style of war against an adversary equipped with some of the most up-to-date French and German armaments. Subsequently, the army suffered from uncoordinated and clumsy signal organisation and practice, particularly during the first half of the war. The defective transmission of information throughout the Battle of Spion Kop (234 January 1900), for example, confirmed how inherently unreliable and subject to accidents British communication arrangements were. Issues of interoperability were a particular concern. In July 1900, a report by Lieutenant-Colonel Tom OLeary, the Director of Army Signalling noted that, because many signallers within the Royal Artillery were instructed in semaphore only, heliographs and signalling lamps could not be used by infantry units wishing to communicate with their artillery batteries. On the whole, post-war reports concurred that the means of signalling available was thought to be poor and insufficient at worse, and merely satisfactory at best. Although by the end of the war there were 24 officers and 2,424 men responsible for maintaining a little more than 9,300 miles of cable in South Africa, there were strong calls from officers within the Telegraph Battalion for a careful analysis of the varying conditions met with on active service, so as to produce an organisation of much greater flexibility and efficiency. Prior to WW1 the British Army conducted its annual field exercises and made great changes to its signals section. The role in field telegraphy in war has entirely changed.

We list militaria and coins weekly. We provide quality mounted medals, badges and historical research. We can mount your miniature or full size medals, ribbon bars or supply replacement ribbons or badges. We can also conduct military research on your behalf and value cherished objects with a current market or insured value. 2/135 Russell St, Morley, WA.

Additional costs for this standard service will be added for this service based on publicly available Australia Post rates. Please note, these items are located and will be posted from Australia. We appreciate fair feedback from you once you receive the item.