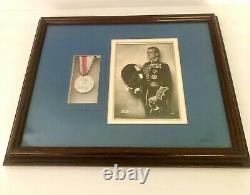 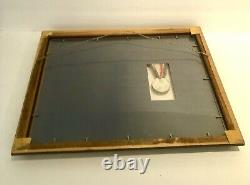 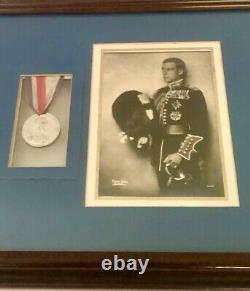 Rare Framed Portrait of King Edward VIII and the Coronation Medal that Never Was. Contained within a carved Walnut Frame with double clear glass.

This is a very clear photographic copy of an original portrait of Edward signed in the plate. " The antique Original silver-tone engraved medal hanging on its original tri-color ribbon reads: "H. The image is beautifully matted in royal blue with golden trim. The medal hangs in its own see-through compartment so as to read the back of the medal which reads:"To Commemorate the Coronation of King Edward VIII May 12, 1937". It is finely engraved with a cross on a crest.

This is an original souvenir medal (not a replicate) and ribbon which is fraying at the edges. The lovely frame is 15 1/2 inches long by 13 1/2 inches wide. Edward became King of the United Kingdom automatically upon the death of his father King George V on January 20, 1936 and held that lofty position and honor for less than a year when he abdicated the throne on December 11, 1936 whereupon his younger brother became King George VI. What makes this framed collection very special and rare is that it contains the medal that was struck to.

Commemorate the coronation that never was. Edward was an uncrowned King for less than a year. He abdicated before the formal crowning ceremony could occur.

Instead his brother was subsequently crowned and doubtless there were souvenir medals celebrating that coronation which eventually took place. King George VI courageously reigned throughout WWII which commenced after he became King and was much beloved by his people. He died within a few years of the Allied Victory in WWII after which his daughter assumed the throne as Queen Elizabeth II and holds that position even to this day. This medal was struck in ANTICIPATION of Edward's formal crowning sometime in 1936 before he abdicated and indicates the date of the then expected ceremony. How the individual who originally owned this medal came to have it is anyone's guess at this point. It memorializes a singular anomaly of British royal history and is a very important keepsake indeed! He left England the day of the abdication to join his wife-to-be Wallace Simpson in France where they were married. They lived in luxurious exile for the rest of their lives primarily in Paris. The King of England is also head of the Church of England which did not recognize divorce and Wallace Simpson his mistress was a twice divorced American.

Prime Minister Stanley Baldwin vigorously opposed the marriage and Edward had to choose between his hereditary duty as King and the'love of his life. He chose the later much to the disappointment of most of the population as well as the Royal Family. He took the title of HRH the Duke of Windsor and Wallace the Duchess of Windsor. She was not accorded the honor of including HRH before her title.

They were shunned by King George VI and the rest of the Royal family for the remainder of their lives. Upon his death he was allowed to be buried with his. Royal ancestors in Windsor Chapel.

The Duchess was likewise accorded the honor to later be buried by. His side on hallowed Royal ground. The acceptance they never received in life after his abdication was. Finally accorded them in death.

The owner of this plaque will thus possess a very unique, rare and singular piece of British Royal History and indeed the fate of Great Britain during and after WWII. This item is in the category "Collectibles\Historical Memorabilia\Royalty Collectibles". The seller is "onlythefinestforyou" and is located in this country: US. This item can be shipped to United States.