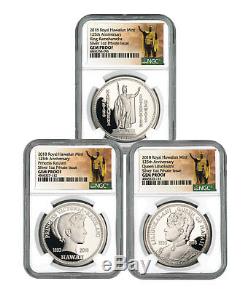 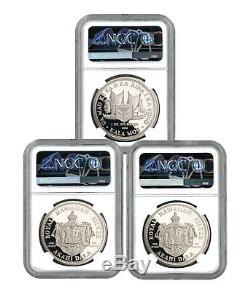 Royal Hawaiian Mint King Kalakaua I 125th Anniversary 3-Coin Set 1 oz Silver Proof Medal NGC GEM Proof SKU56506. The stunning beauty and perceived laid back way of life of the Hawaiian islands make them a top attraction for tourists from around the world year in and year out. Although those alive today know it as a state, the islands had various forms of government over the centuries and were a unified kingdom for a while during the 1800s. That kingdom came to an end in 1893, when the US government overthrew the monarchy. Now, the Royal Hawaiian Mint is commemorating the 125th anniversary of the end of the Hawaiian monarch with this three piece set.

Each piece was struck from one ounce of. This set is one of just 1,000 minted. One of the three medals in the set honors King Kamehameha, the first king of the islands.

He stands powerfully in an image that is based on a bronze and gold statue of him that stands in front of the state's Supreme Court. The reverse of the round features a traditional Hawaiian outrigger boat.

It is encircled by rim inscriptions, including the state's motto in Hawaiian. That motto translates to The life of the land is perpetuated in righteousness. Also inscribed on this face are the medal's weight and purity. The obverses of the other two coins feature, separately, Queen Liliuokalani and Princess Victoria Kaiulani. Their names and titles arch over their portraits, which are flanked by the anniversary dates, "1893" and 2018.

"AKAHI DALA" and "ROYAL HAWAIIAN SILVER" are inscribed along the rim, while smaller inscriptions provide each medal's weight and purity. Stunning GEM Proof with King Kamehameha Labels. Numismatic Guaranty Corporation (NGC) certified each of these coins as being in GEM Proof condition. The grading company provided those certifications on labels that bear an image of the statue of King Kamehameha on which the obverse of his medal is based. Don't miss your chance to own this 3-Piece Royal Hawaiian Mint King Kalakaua I 125th Anniversary 1 oz Silver Proof Medal Set.

We cannot make any price adjustments after the sale is complete. Product Photo Policy: MCM attempts to display product images shown on the site as accurately as possible. We take all of our photos in house and due to reflections on the mirrored or proof surfaces of a coin there may appear to be'black' when there is not. If a coin has a color on it at all it will be described as'colorized' in the description or title. Due to the large inventory we sell, we use stock photos.

Serial numbers will vary from the image shown unless specifically stated in the product listing that the item pictured is the item you will receive. INTERNATIONAL ORDERS POLICY: We are accepting international orders from select countries.

These charges are the customer's responsibility. However, we cannot guarantee this due to the volume of orders we process each day. Beyond the 30-day return period, Company is under no obligation to accept return of any product, but may in its discretion do so pursuant to this policy, for up to one year from the invoice date. ModernCoinMart (MCM) was launched in 2004 and quickly set the standards for online sales of bullion, US coins and world coins.

Join over 100,000 loyal customers and feel confident purchasing from a company that's spent a decade building a solid and stellar reputation trusted and recognized around the world. That's the MCM way.

This item is in the category "Coins & Paper Money\Coins\ US\Commemorative\Modern Silver/Clad (1982-Now)". The seller is "mcm" and is located in Sarasota, Florida. This item can be shipped worldwide.