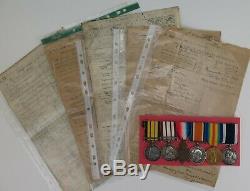 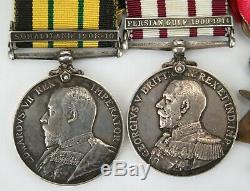 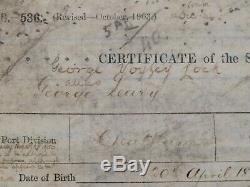 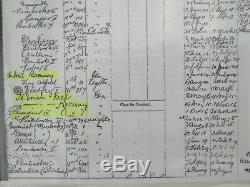 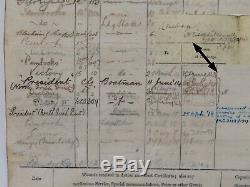 His LSGC medal awarded during his time in Ireland is named to his alias. The use of an alias is not easy to understand.

The name Leary may have been subject to ridicule but this alias was not used when he served in the Royal Marines Light Infantry. His service in Ireland was in an area which had republican sympathies (see description below). Service certificates and extensive typed service details. Provenance: Ex Malcolm Scott Collection. Date of Birth: 20 April 1880, Tavistock, Devon.

Following the loss of the turbine-powered destroyer HMS. As part of these investigations, a number of full-scale tests were carried out on. To determine the stresses to which destroyers could be exposed to at sea.

Launched 19 Jan 1904, Completed 5 Sep 1905. 1st Cruiser Squadron, Channel Fleet. Stoker 2nd Class: 3 Sep 1907 - 18 Sep 1907. Stoker 2nd Class 19 Sep 1907 - 14 Aug 1908. Stoker 1st Class: 15 Aug 1908 - 12 Jan 1909. Was a Royal Navy battleship that revolutionised naval power. Built 1905 - 1906, In Service 1906 - 1919. Dreadnought's name, and the class of battleships named after her, means "fear nothing". S entry into service in 1906 represented such an advance in naval technology that her name came to be associated with an entire generation of battleships, the "dreadnoughts", as well as the class of ships named after her. Likewise, the generation of ships she made obsolete became known as "pre-dreadnoughts". Was the first battleship of her era to have a uniform main battery, rather than having a few large guns complemented by a heavy secondary armament of smaller guns. Her launch helped spark a naval arms race as navies around the world, particularly the German Imperial Navy, rushed to match it in the build-up to the First World War. Stoker 1st Class: 13 Jan 1909 - 12 Feb 1909.

London base for Coastguard ships and the Reserves. Formally HMS Buzzard moored on the River Thames, near Tower Bridge, Wapping. Boatman: 11 Jun 1914 - 31 July 1914. The Coastguard as run by the Admiralty consisted of three distinct bodies; the Shore Force, the Permanent Cruiser Force and the Guard Ships, naval ships which lay at major ports to act as headquarters of Coastguard districts.

A British observation post was built during World War I to prevent the Germans from landing arms for the Irish Republican Army. This may explain the use of an alias. Irish Rosmoney: Boatman: 19 May 1915 - 30 Sep 1916. President IV London base for Coastguards.

The Irish people's experience of the war was complex and its memory of it divisive. At the outbreak of the war, most Irish people, regardless of political affiliation, supported the war in much the same way as their British counterparts, and both. Leaders initially backed the British war effort. Served extensively in the British forces, many in three specially raised divisions. Over 200,000 men from Ireland fought in the war, in several theatres.

This item is in the category "Collectables\Militaria\World War I (1914-1918)\Medals/ Ribbons". The seller is "nigel315" and is located in Melrose. This item can be shipped worldwide.