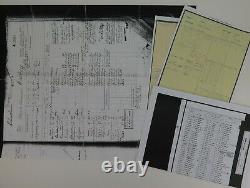 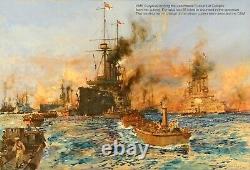 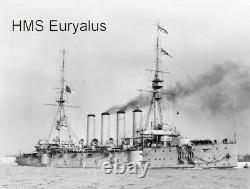 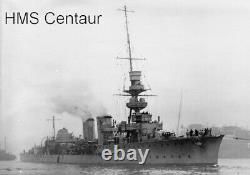 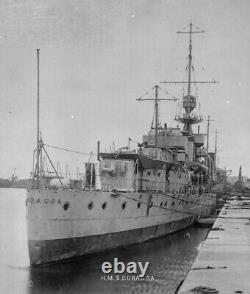 Launched 7 Oct 1903, Completed 29 May 1905. Reserve 2nd Fleet Devonport and subsequently became the flagship of the 5th Cruiser Squadron until the start of World War I.

Had to return to port to re-coal. The three remaining cruisers were sunk by the German Submarine U-9. Were transferred to 12th Cruiser Squadron. Became flagship of Rear Admiral Richard Pierse, CinC East Indies Station and was sent to Egypt in January 1915 to reinforce the Suez Canal defences.

On 15 April 1915, Euryalus became flagship of Rear Admiral Rosslyn Wemyss, commander of the Gallipoli landings at Cape Helles. Put ashore three companies of 1st Battalion Lancashire Fusiliers at W beach (they won 6 VCs before breakfast). The Fusiliers lost 11 Officers and 350 men. 63 of the 80 Euryalus ratings manning the boats were killed or wounded.

Sank the German torpedo boat. In the North Sea near the Schouwen Bank off Zeebrugge, Belgium.

Briefly assigned to the Atlantic Fleet in early 1919. Was deployed to the Baltic in May to support anti-Bolshevik forces during the British campaign in the Baltic during the Russian Civil War. On 7 May 1919, Rear-Admiral.

When she struck a mine with her stern, 70 miles (110km) east of Reval now. One crewman was killed and three injured by the explosion. Cowan, who was taking a bath at the time, was dumped out of the bath, running to the bridge dressed only in an overcoat until clothing could be brought up from his "day cabin".

Petty Officer: 30 Jul 1932 - 1 May 1933. Petty Officer: 2 May 1933 - 28 Aug 1933. Amazon : Launched 27 Jan 1926, Commissioned 5 May 1927, was a prototype design of destroyer ordered for the Royal Navy in. She was designed and built by Thornycroft in response to an admiralty request for a new design of destroyer incorporating the lessons and technological advances of the First World War. Was easily recognisable by her slab-sided funnels, characteristic of Thornycroft vessels.

Unlike earlier designs, which were designed for home fleet service, they were designed for colonial use, with higher freeboard, cruising turbines and better ventilation. Such was the Navy's satisfaction with the design that they formed the basis of the next 77 subsequent destroyers, often known as the "interwar standard", up to (but not including) the Tribal class of 1936. Petty Officer: 29 Aug 1933 - 17 Oct 1933. Petty Officer: 18 Oct 1933 - 12 May 1934.

The extract shows short periods of'Duty' (the longest being 6 days). I also obtained a copy (from the Royal Navy) of his entitlement to both the Africa star and the Italy star (as well as the other three WW2 medals). Had service in those theatres. This is particularly the case for me who served as gun crew on Defensively Equipped Merchant Ships or in Combined Operations, whose records only show where they were being administered from and not where they were actually serving. The item "Royal Navy LSGC Medal group.

Gallipoli landings HMS Euryalus" is in sale since Monday, November 8, 2021. This item is in the category "Collectables\Militaria\World War I (1914-1918)\Medals/ Ribbons". The seller is "nigel315" and is located in Melrose. This item can be shipped worldwide.