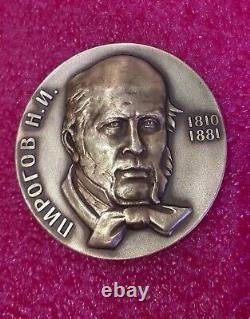 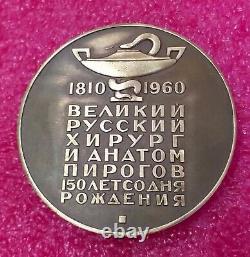 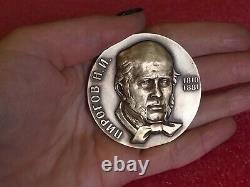 And corresponding member of the Russian Academy of Sciences. (1847), one of the most widely recognized Russian physicians. Considered to be the founder of field surgery.

He was the first surgeon to use anaesthesia in a field operation (1847) and one of the first surgeons in Europe to use ether. He is credited with invention of various kinds of surgical operations and developing his own technique of using plaster casts. Years as doctor and field surgeon.

Nikolay Pirogov was born in Moscow, the 13th of 14 children of Ivan Ivanovich Pirogov (born around 1772), a major in the commissary service and a treasurer at the Moscow Food Depot. Whose own father came from peasants and served as a soldier in Peter the Great.

S army before retiring and opening a brewery in Moscow; Pirogov's mother Elizaveta Ivanovna Pirogova (nee Novikova) belonged to an old Moscow merchant family and was four years younger than her husband. He learned to read in several languages as a child. His father died in 1824, leaving his family destitute. Pirogov originally intended to become a civil servant, but the family doctor Yefrem Mukhin. Who was a professor of anatomy and physiology at the Imperial Moscow University. Persuaded the authorities to accept a 14-old Pirogov as a student. In 1828 he finished the Faculty of Medicine and entered the Imperial University of Dorpat. Where he studied under Professor Moyer who, in return, studied under Antonio Scarpa. And received a doctorate on ligation of the ventral aorta. In May 1833, he travelled to Berlin, meeting such surgeons as Karl Ferdinand von Graefe.

At the University of Berlin. Taught Pirogov how to properly use the scalpel. Pirogov also visited the University of Göttingen. In October 1840, Pirogov took up an appointment as professor of surgery at the Imperial Academy of Military Medicine. And undertook three years of military service in this period.

In 1847, and investigated cholera. Around this time he compiled his anatomical atlas, Topographical anatomy of the human body vol. He worked as an army surgeon in the Crimean War. From his works in the Crimea, he is considered to be the father of field surgery. He followed work by Louis-Joseph Seutin. For setting broken bones, and developed a new osteoplastic. Of the foot, known as the "Pirogov amputation". He was also the first to use anesthesia in the field, particularly during the siege of Sevastopol. And he introduced a system of triage. He encouraged female volunteers as an organised corps of nurses, the Khrestovozdvizhenskaya. At the Saint Petersburg Charity Encyclopedia community of nurses established by Grand Duchess Yelena Pavlovna. After the Crimean War Florence Nightingale. Laid the foundations of professional nursing for the British. Portrait of Nikolay Pirogov by Ilya Repin. He wrote an influential paper on the problems of pedagogy. Of the poor, non-Russians, and women. He was influential in his family's decision to educate his niece Henriette Joudra. Who would go on to earn her medical doctorate and become the first woman to open a private medical practice in Geneva.

He also argued against early specialisation, and for the development of secondary schools. In 1858 he received the rank of Privy Councillor.

And was transferred to Kiev. As a superintendent of schools of the Kiev Educational District after disagreements with the Odessa. In 1861 he became a member of the Main Directorate of Schools, serving at the Ministry of National Education. Same year he bought an estate in the Vishnya village near Vinnytsia. In 1862, he took charge of a delegation of Russian students sent overseas to prepare for professorship.

And at one point treated Giuseppe Garibaldi. S injury sustained at Aspromonte. In 1866 upon return to Russia he settled down at his estate, treating local peasants and establishing a free clinic. In 1870 he visited the battlefields and field hospitals of the Franco-Prussian War.

As a representative of the Russian Red Cross. Treating both Russian and Bulgarian.

Soldiers and organizing field hospitals. In 1879 he published The Old Physician's Diary and "Questions of Life".

He last appeared in public on 24 May 1881 and died later that year at his Vishnya estate, Podolian Governorate. His body is preserved using embalming. Techniques he himself developed, and rests in a church in Vinnytsia. Compared to the corpse of Lenin. Which undergoes thorough maintenance in a special underground clinic twice a week, the body of Pirogov rests untouched and unchanging: it is said that only dust has to be brushed off of it.

It resides at room temperature in a glass-lid coffin (while Lenin's body is preserved at a constant low temperature). Soviet 1960 stamp, published during his 150th anniversary. Nikolay Pirogov was from 1847 corresponding member of the Russian Academy of Sciences. And received in 1844, 1851 and 1860 the Demidov Prize. He was appointed honorary citizen of Moscow in 1881. The Pirogov Society was founded four years after his death, which aims for better medical training and treatment in Russia. The Pirogov Museum is located in Vinnytsia, Ukraine at his former estate and clinic. Near this 1947 building is a mausoleum.

Which is used as a family chapel and in which his embalmed body is visible in public. Bulgaria and the 2506 Pirogov. Discovered in August 1976 by Russian astronomer Nikolai Chernykh.

Are all named in honour of him. The medical universities Russian National Research Medical University. And Odessa State Medical University. Were formerly named after him, until the Russian Revolution. Stamps with his portrait were published in the Soviet Union in 1949 and his 150th anniversary in 1960.

The highest humanitarian prize in the Soviet Union was the Pirogov Gold Medal. Apart from his developed foot amputation techniques, several anatomical structures were named after him, such as the Pirogoff angle. A triangular area located between the mylohyoid muscle. This item is in the category "Coins & Paper Money\Exonumia\Medals".