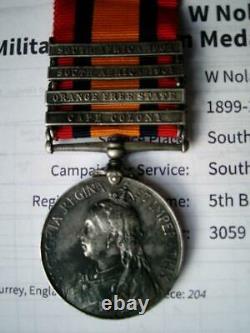 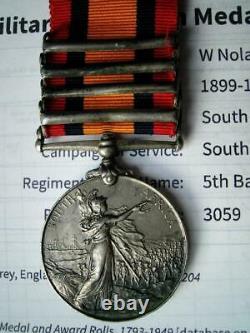 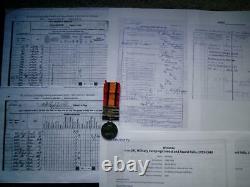 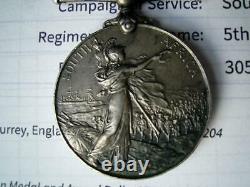 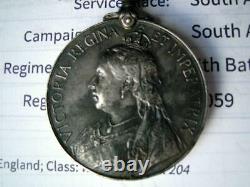 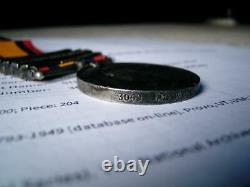 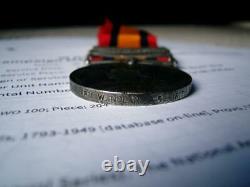 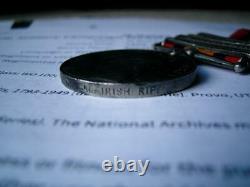 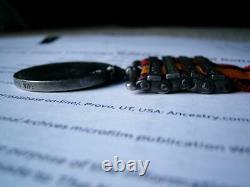 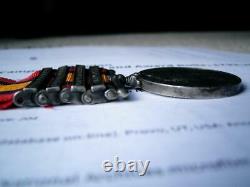 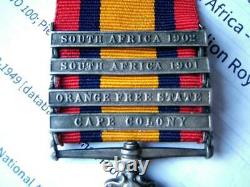 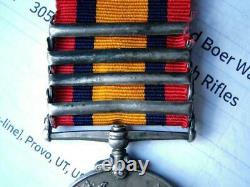 The 2nd Battalion sailed on the Britannic about 26th October 1899, and arrived at the Cape on 14th November. They were at once sent round to East London, and got into Queenstown on the 18th. It was intended that they should form part of Major General Hart's Irish or 5th Brigade, but the exigencies of the situation had made it necessary that the other battalions of that brigade should be diverted to Natal. The divisional commander was to have been Sir W F Gatacre. He disembarked at East London, but the Irish Rifles alone out of his eight battalions joined him. The 1st Royal Scots and 2nd Northumberland Fusiliers, originally sailing as corps troops, were landed at East London soon after the Rifles, so that the general had shortly at his command three full battalions, half of the 2nd Berkshire Regiment, some companies of regular Mounted Infantry, and some useful local troops, such as the Cape Mounted Rifles, Kaffrarian Rifles, and Brabant's Horse, all of whom were soon to be got into shape, and turned out capable of very good work. Victorian Boer War QSA medal OFS CC SA01&02 Pte Nolan Royal Irish R from Antrim. , official impressed, IMO very fine condition, some light wear and contact marks, medal award and clasps verified on medal rolls, copy extracts and part service record supplied, see pictures for condition. The first serious fighting was at Stormberg, and that melancholy story has already been briefly told under the 2nd Northumberland Fusiliers. No one could blame the Rifles; had they shirked the attack their losses would have been very much less serious. As it turned out, these were approximately 12 men killed, 8 officers, including Colonel Eager, who afterwards died, and 45 men wounded, and 3 officers and over 200 men taken prisoners.

It is said that Colonel Eager reached a higher point than any one else in the assault and there was shot down. The evidence given before various courts of inquiry, an abstract of which is printed in the proceedings of the War Commission, shows (1) that the companies who had been foremost in the assault were partially stopped in their progress by the fire of the British artillery, and (2) that these companies were not properly notified of the general's decision to retire. The battalion, shortly strengthened by drafts from home, remained with Sir W F Gatacre in the Queenstown-Molteno district until Lord Roberts' advance from Modder River to Bloemfontein scared the Boers out of Cape Colony. General Gatacre moved north via Stormberg and Burghersdorp, and crossed the Orange River about the middle of March.

The general's headquarters were at Springfontein, and in accordance with Lord Roberts' desires columns were sent out from the line to distribute proclamations. The enemy, taking heart at the halt which had to be made after the occupation of Bloemfontein, swooped down first on Broadwood at Sannah's Post and then farther south to Reddersburg, where they came upon a detachment which consisted of three companies of the Royal Irish Rifles and two companies of Mounted Infantry, chiefly of the 2nd Northumberland Fusiliers. Early on 3rd April the enemy attacked with rifle and artillery, over 2000 Boers being present. On the morning of the 4th the force surrendered.

Two officers of the Fusiliers and 9 men, chiefly of the Rifles, were killed; 2 officers and about 35 men were wounded, and the remainder taken prisoners. The evidence given before the courts of inquiry shows (1) that the position taken up was too large for the force available; (2) that men and horses were exhausted by the previous forced march, short rations, and want of water; (3) that the absence of artillery was against a successful defence, and that the enemy numbered four times the defenders and had four guns. Again the battalion had suffered a grievous defeat, perhaps through no fault of their own. This disaster, following on Stormberg, sealed the fate of General Gatacre.

He was ordered to England; but in connection with this latter mishap it has to be borne in mind that, a very few days before Sannah's Post, Lord Roberts himself was convinced the country to the south of Bloemfontein was settling down. We had not yet learned the enemy's marvellous ability in the way of making sudden raids on isolated posts.

In General Gatacre's evidence before the War Commission he did not defend his conduct of the Stormberg expedition, but said the seizure of that place had been suggested to him by the Commander-in-Chief at Cape Town. As to the Reddersburg affair, he said the small force was sent to Dewetsdorp on the orders of Lord Roberts, dated 28th March, that Lord Roberts was to make the road from Bloemfontein to Maseru (near Ladybrand) "safe", but that through Broadwood's mishap and the withdrawal of British troops from the Waterworks neighbourhood, that road was left unoccupied, and the force at Dewetsdorp became exposed.

This through no fault of General Gatacre's. Two such disasters as the 2nd Royal Irish Rifles had suffered seriously affected their career in the campaign, and henceforth they were to be employed chiefly on garrison work in the Orange River Colony.

In the summer of 1900 they were part of the garrison of Bloemfontein, from which they were temporarily withdrawn in the beginning of September to join a column for the relief of Ladybrand, which was duly accomplished. In the autumn of 1900 two companies of the battalion were in a column under Lieutenant Colonel White which operated in the south-east of the Orange River Colony. A small detachment from the regiment were, along with three companies of the 2nd Gloucesters and one company of the Highland Light Infantry, at Dewetsdorp when it was attacked and taken by De Wet about 23rd November 1900. The battalion furnished two excellent companies of Mounted Infantry, which did good work in 1901 under Colonel Western and other commanders.

The item "Victorian Boer War QSA medal OFS CC SA01&02 Pte Nolan Royal Irish R from Antrim" is in sale since Saturday, December 4, 2021. This item is in the category "Collectables\Militaria\Boer War (1899-1902)". The seller is "theonlineauctionsale" and is located in England. This item can be shipped worldwide.