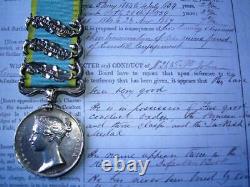 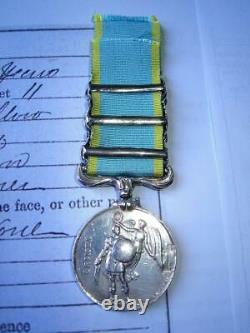 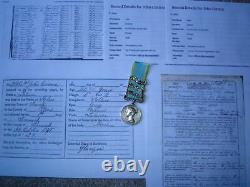 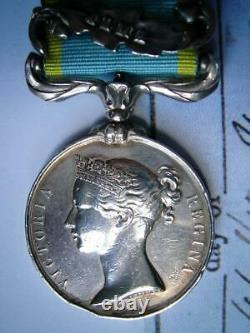 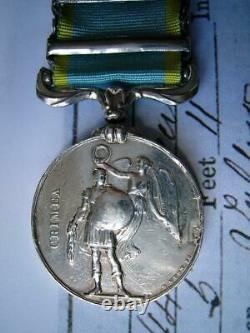 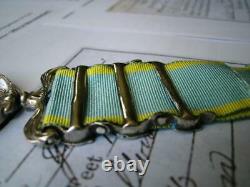 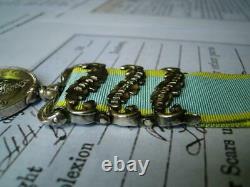 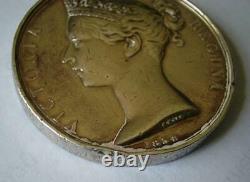 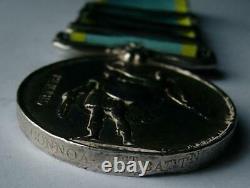 County Clare is Irelands westernmost county, bounded by the mighty Atlantic on the west and the tranquil waters of Lough Derg on the east. He attested for the 1st Regiment October 1848 aged 23, previous trade labourer. He was posted to the Crimea in time for the battle of Alma, fought at Inkermann and seige of Sebastopol earning medal and three clasps, also entitled to Turkish Crimea medal, in Crimea from May 1854, served 2 years 2 months. Posted to Malta 1857 for 2 years. After 10 years service he re-engaged with the regiment for further service 1858.

Royals, IMO Nearly very fine / good fine condition, minimal contact marks front/back, some edge bruising, some wear, light brooching mark tails side at 3 O'clock edge, 3 bar medal with battle clasps for Alma, Inkermann and Sebastopol, confirmed in attestation papers and three clasps on medal rolls, (top two silver taylors' copy clasps), suspension swivels freely but a little slack on post, copy medal roll extracts and some attestation service record included, see pictures for condition The Crimean War campaign for the Royal Scots Regiment was the last time the 1st and 2nd Battalions fought along side each other the 1st Battalion arriving in time for the Battle of Alma. The Regiments first VC was won by Private Prosser during the Siege of Sevastopol for two acts of heroism.

Crimea veterans posing for photo (colourised enhanced black and white original) John Connoa born 1823 small town of Scariff, Co Clare, Ireland. Correct "Connoa" stationed Trimulgherry, a suburb of Secunderabad in Andhrapradesh, Central India 1861. Battle of Alma - troops fording the Alma river The Battle of the Alma was a battle in the Crimean War between an allied expeditionary force made up of French, British and Turkish forces and the Russian forces defending the Crimea on 20 September 1854.

The allies had made a surprise landing in Crimea on 14 September. The allied commanders, Marechal Jacques Arnaud and Lord Raglan, then marched towards the strategically important port-city of Sevastopol, 45 kilometres (28 mi) away.

The Russian commander, rushed his available forces to the last natural defensive position before the city, the Alma Heights, south of the Alma River. The allies made a series of disjointed attacks. The French turned the Russian left flank with an attack up cliffs which the Russians had considered unscalable.

The British initially waited to see the outcome of the French attack, then twice unsuccessfully assaulted the Russian's main position on their right. Eventually superior British rifle fire forced the Russians to retreat. With both flanks turned the Russian position collapsed and they fled. The lack of cavalry meant that there was little pursuit. The battle cost the French 1,600 casualties, the British 2,000 and the Russians some 5,000. The Battle of Inkerman was fought during the Crimea War on 5 November 1854 between the allied armies of Britain, France and Ottoman Empire against the Imperial Russian Army. The battle broke the will of the Russian Army to defeat the allies in the field, and was followed by the Siege of Sevastopol. The role of troops fighting mostly on their own initiative due to the foggy conditions during the battle has earned the engagement the name "The Soldier's Battle". Despite being severely outnumbered, the allied troops held their ground, becoming a marvel of each regiment's tradition and tenacity. The amount of fog during the battle led to many of the troops on both sides being cut off, in battalion-sized groups or less. Thus, the battle became known as "The Soldier's Battle". The Russian attack, although unsuccessful, had denied the allies any attempt at gaining a quick victory in the Siege of Sevastopol and condemned the allied armies to two terrible winters on the heights. Following this battle, the Russians made no further large-scale attempts to defeat the allies in the field. By his account allied casualties were: 2,573 British, of whom 635 were killed, and 1,800 French, of whom 175 were killed. Russia lost 3,286 killed within a total (including men taken prisoner) of 11,959 casualties.

The Allies had had time to consider the problem, the French being brought around to agree that the key to the defence was the Malakoff. Several weeks of fighting saw little change in the front line, and the Mamelon remained in Russian hands. In April 1855, the allies staged a second all-out bombardment, leading to an artillery duel with the Russian guns, but no ground assault followed.

On 24 May 1855, sixty ships containing 7,000 French, 5,000 Turkish and 3,000 British troops set off for a raid on the city of Kerch east of Sevastopol in an attempt to open another front on the Crimean peninsula and to cut off Russian supplies. When the allies landed the force at Kerch, the plan was to outflank the Russian army. The landings were successful, but the force made little progress thereafter.

Many more artillery pieces had arrived and had been dug into batteries. In June, a third bombardment was followed after two days by a successful attack on the Mamelon, but a follow-up assault on the Malakoff failed with heavy losses. The resulting Battle of Tchernaya was a defeat for the Russians, who suffered heavy casualties. For months each side had been building forward rifle pits and defensive positions, which resulted in many skirmishes. Artillery fire aimed to gain superiority over the enemy guns. September saw the final assault, on 5 September, another French bombardment (the sixth) was followed by an assault by the French Army on 8 September resulting in the capture of Malakoff by the French, and following the failure of the Russians to retake it, the collapse of the Russian defences.

Meanwhile, the British captured the Great Redan, just south of the city of Sevastopol. The main objective of the siege, the destruction of the Russian fleet and docks, took place over winter.

On 28 February 1856, multiple mines blew up the five docks, the canal, and three locks. The item "Victorian Crimea medal Alma Inkermann Sebastopol 1st Royal Scots from Co Clare" is in sale since Sunday, July 18, 2021. This item is in the category "Collectables\Militaria\19th Century (1800-1899)\Medals/ Ribbons". The seller is "theonlineauctionsale" and is located in Leamington Spa. This item can be shipped worldwide.