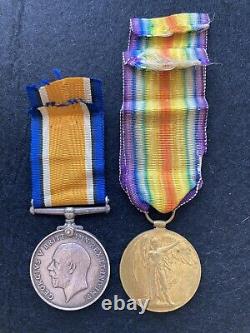 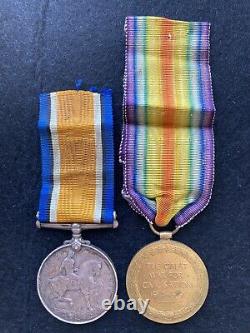 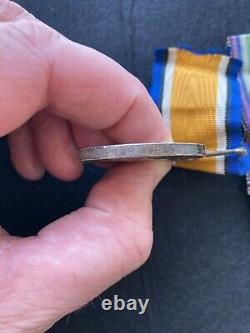 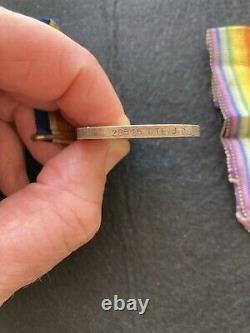 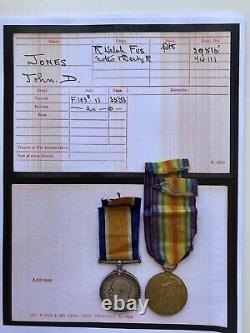 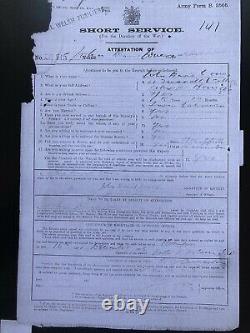 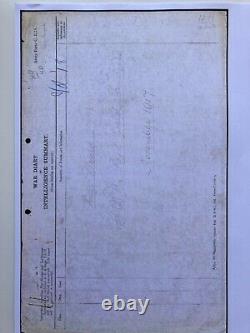 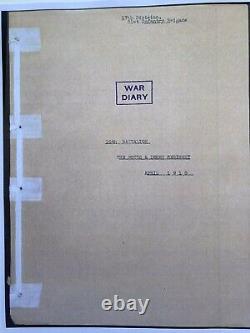 World War 1 British War & Victory Medal correctly named to 29515 Pte J D Jones 19th (Service) Battalion Royal Welsh Fusiliers and latterly 10th (Service) Battalion Sherwood Foresters Notts and Derby Regiment, who was Killed in Action 17 April 1918 at Mesnil. John David Jones was born in the village of Llanllechid, Carnarvon, Wales in 1897. He attested for the army in Bangor on 14 December 1915. On his Army Service Papers he states his trade as Farm Labourer, his age 19 years and 10 months. He married his wife Elizabeth on 15 May 1915 at Bangor Registry Office.

John D Jones disembarked in France, with the 19th RWF in June 1916. They initially went into the front line near Loos and were later to see action at the Battle of the Ancre on the Somme. In 1917 the Battalion saw lots of action, including during the German retreat to the Hindenburg Line and the capture of Bourlon Wood on 23 November 1917. The Battalion War Diary gives details of the fighting to take Bourlon Wood, along with 12th South Wales Borderers. It mentions the attack being checked by machine gun fire but making it into the wood, capturing prisoners and taking out enemy posts, with the bayonet. Private J D Jones service papers show he was Wounded in Action on 23 November, re-joining the unit in December 1917. The 19th (Service) Battalion Royal Welsh Fusiliers were disbanded in February 1918 and on 6th April Private Jones was transferred to 10th (Service) Battalion Sherwood Foresters Notts and Derby Regiment.

Upon transfer he was issued with a new service number, this being 74111. The War Diary for the 10th Sherwood Foresters states they received a draft of 216 former RWF, Pte. J D Jones was amongst these men. It goes on to say that the Battalion was in the front line at Mesnil on 14 April 1918.

Between 16 and 19 April they were subject to heavy shelling, both day and night and casualties are described as somewhat heavy. Private John D Jones was one of those casualties. His service records show he was Killed in Action on 17 April 1918. He was 21 years old and left a wife, Elizabeth, and a child. He is commemorated on the Pozieres Memorial, Stone no. The British War and Victory Medal are his full entitlement for his service during World War 1. The medals come with original ribbons and lots of research including copies of.

War Diary of 10th Sherwood Foresters for April 1918, covering the period from he joined the unit to the day when he was unfortunately killed. The item "World War 1 British War & Victory Medal-Pte J D Jones Royal Welsh Fusiliers KIA" is in sale since Friday, October 22, 2021. This item is in the category "Collectables\Militaria\1914 - 1918 (WWI)". The seller is "lsalaris" and is located in Kinross, WA. This item can be shipped worldwide.