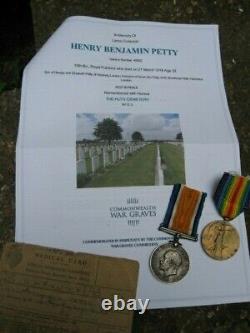 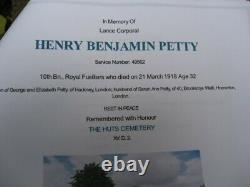 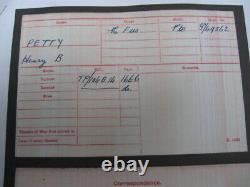 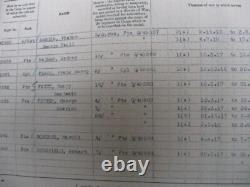 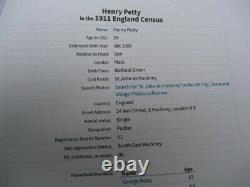 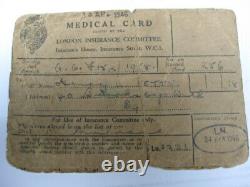 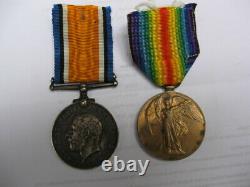 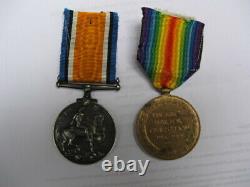 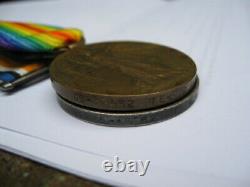 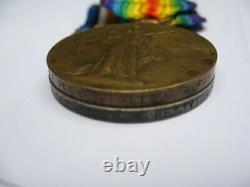 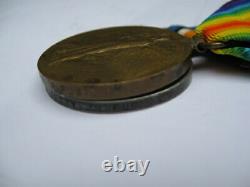 This listing is for a WW1 pair of Medals to a Casualty and a later, family related Medical Card. Both Medals are correctly impressed, to... He had enlisted into the 10th Battalion, Royal Fusiliers....

Known as the'Stockbrokers' Battalion. His rank was then a L/Cpl. He was Married and shown as living in the Dalston area. Unfortunately, His Service Records don't appear to have survived.

However, the Medal Rolls states He arrived in France on the 12th of January, 1917. He was to be unfortunately, Killed in Action, on the 21st March 1918 CWGC States'KIA'... He is buried in The Huts Cemetery. His name is also commemorated on the Homerton (Hackney) War Memorial at St Barnabus Church, E. He was a true East-Ender.

The Two Medals listed here, are His Full entitlement. Both Medals are in good condition.

The BWM is nicely toned. The VM has light Verdigris spots to both sides. Both have their original, short silk ribbons. The Medical Card is both tatty and torn.

I can't quite make out the name, although they have a'E. A interesting pair to a sought after Battalion. Plenty of scope for further research. Will include copies of the Medal Roll, MIC, CWGC, etc.

Will post Worldwide-Cost shown is for the EU. Will be sent Tracked and fully insured.

This item is in the category "Collectables\Militaria\World War I (1914-1918)\Medals/ Ribbons". The seller is "telecombod" and is located in this country: GB. This item can be shipped to all countries in Europe, United States, Canada, Australia.