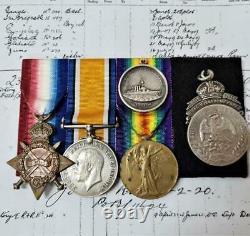 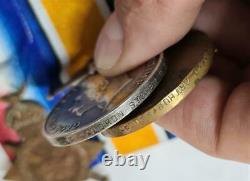 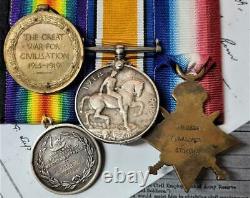 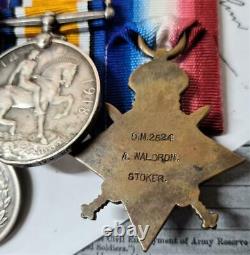 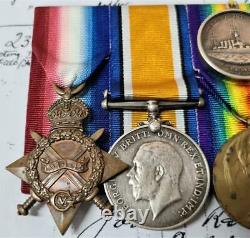 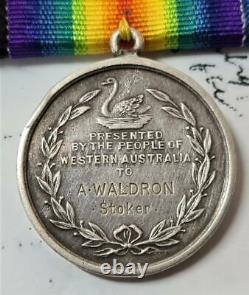 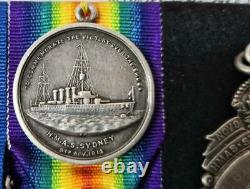 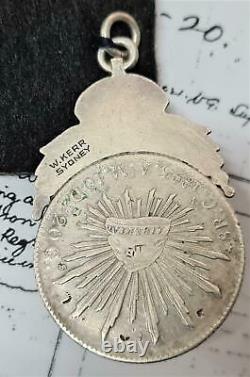 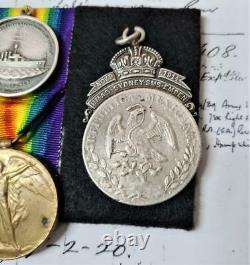 WALDRON STOKER engraved on reverse. All court mounted for display. Service papers, Army service papers and R. These medals have come direct from the family in England.

He commenced training on H. Euryalus, both being relegated to Boys training ships. This was followed by service on H.

On his 18th birthday, he signed on for 12 years (17/4/1908), however he deserted and enlisted with the 2nd Battalion Royal Irish Regiment at Gosport on the 18th May 1909 being given the service number 9816. A note on his R. Service records shows Serving as No 9816, Pte A. Waldron in 2nd Battn Royal Irish Regiment. Not claimed for further service in R. On his Army service papers he gives his correct details but stated he has never served in the armed forces previously, however the authorities quicky found out his past and on the 27/9/09 he was being held in the Guard Room awaiting trial. On the 6/10/09 he was awarded 56 days military prison by a General Court Martial for making a wilfully false statement.

22/7/1910 Waldron was discharged medically unfit for further service; however, he made his way to Melbourne, Australia and enlisted as a stoker with the Royal Australian Navy on the 8/1/1913, his occupation given as labourer. After a short stint at H. Cerberus and Encounter, he was sent to the London Depot 1/5/1913 26/6/1913, and then posted to H.

At the outbreak of the war, H. Sydney was part of the Australian Naval and Military Expeditionary Force A. Which was tasked with seizing the German colonies in the S. E Pacific including New Guinea. The Sydney landed its 12-pounder field gun and 25 men of the naval contingent during the capture of Rabaul.

For the next eighteen months the Sydney was engaged patrolling off neutral ports in the Americas. In October 1916 she was involved in North Sea patrols and on the 4th May 1917 engaged the German Zeppelin L43 during which neither side scored any hits.

His final posting was to H. Australia 13/3/18 8/1/1920 and discharged to shore. Service noted on records: Taking of German New Guinea 11/9/14. Sydney Emden Battle 9th November 1914 The S. Emden was a Dresden class light cruiser, at the start of the war the she was tasked with raiding Allied ships in the Indian Ocean. During the first two months she captured nearly two dozen ships, attacked the port of Penang and sank two Allied warships whilst she did so and shelled the port and oil installations at Madras. The end came when von Muller landed a party of 50 men to attack the British coaling station in the Cocos Islands; he intended to destroy the wireless station there and draw away British forces searching for him in the Indian Ocean. Sydney was 96km away escorting a convey and was immediately despatched to the scene. The Sydney sighted the Emden at about 9:15am as she approached the Cocos Island, the Emden moved out from the harbour at about 9:30am, by this time the Sydney was closing in and preparing for battle. (This included hosing down the decks to assist with damage control because of the risk of fires). The Emden commenced firing at about 10,000 yards and the Sydney responded a couple of minutes later. Both ships were sailing on a parallel course with the Emden scoring the first hit with its fifth salvo hitting the Sydneys bridge. The shell failed to explode as did 10 of the 15 rounds of 4.1-inch shells. Captain Glossop manoeuvred the Sydney to open the distance to make use of his superior gunnery range. The Sydney was armed with two submersed 18 torpedo tubes being mounted to both port and starboard. At 5,500 yards range the Sydney discharged a torpedo, increased speed and turned sharply to starboard.

The torpedo failed to hit as the range had been wrongly estimated as under 5,000 yards: and the torpedo set for 5,000, ran that distance with excellent direction and then stopped (Beans Official History of Australia in the war of 1914 18). The Emden made a run for the reef at Cocos and grounded herself Beans The Official History states one torpedo launched, Andy Smiths book H. We list militaria and coins weekly. We provide quality mounted medals, badges and historical research. We can mount your miniature or full size medals, ribbon bars or supply replacement ribbons or badges.

We can also conduct military research on your behalf and value cherished objects with a current market or insured value. We run two specialist military auctions per year. Items are accurately described & photographed. Additional costs for this standard service will be added for this service based on publicly available Australia Post rates. Please note, these items are located and will be posted from Australia. We appreciate fair feedback from you once you receive the item. We aim to give you, the customer our best customer service. The item "WW1 deserters British & Royal Australian Navy Sydney/Emden action medal group" is in sale since Sunday, April 25, 2021. This item is in the category "Collectables\Militaria\1914 - 1918 (WWI)". The seller is "jb_military_antiques_14" and is located in 2/135 Russell St, Morley, Perth, WA. This item can be shipped worldwide.