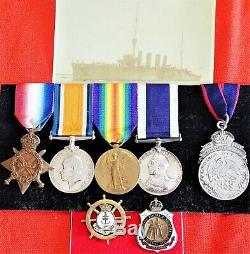 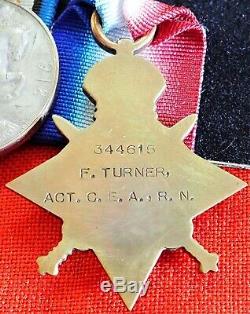 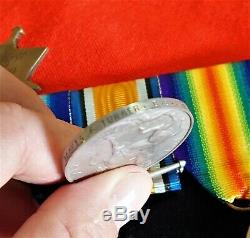 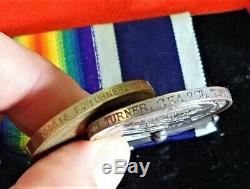 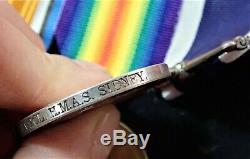 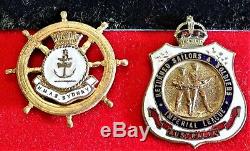 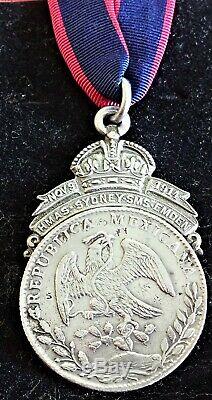 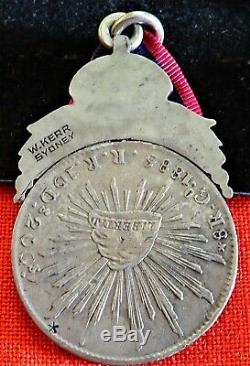 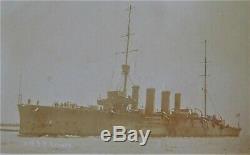 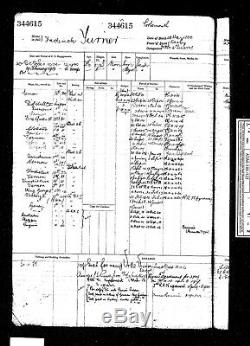 Offered is a World War 1 Royal Navy/Royal Australian Navy group of 5 medals to Chief Engine Room Artificer Frederick Turner, who was a crew member aboard H. Sydney, when she engaged and caused the scuttling of the German raider Emden in October 1914.

He was one of the original commissioning crew of the H. Sydney and one of the few R. N sailors present at the Sydney-Emden action.

Further he was present at Australia's first military action in WW1 being the capture of German New Guinea. Enlisted for 12 years Portsmouth 30/10/1901. Fitter and Turner by trade but served as Electrical Artificer. He would have been one of the 1. To be trained as an Electrical Artificer and served in this role in the R.

1901-The position of'Electrical Artificers' was created: The Royal Navy recognised the growing need for specialist electricians in the fleet, and introduced the Electrical Artificer specialisation. Three "Centres of Excellence" for the training of Engine Room Artificer Apprentices had been established at Chatham, Plymouth and Portsmouth, the latter housed in a collection of Victorian hulks in the harbour, being designated HMS Fisgard. Served between 1901- 1/3/1913, Royal Navy in the following ships and shore establishments.

(Shore based training establishment) x 6 postings. Launched in 1852, being powered both by sail and steam. The personnel stationed on her eventually moved into R. Intrepid was an Apollo-class protected cruiser of the Royal Navy built on the River Clyde and launched in 1891. She was subsequently converted as a.

During the Zeebrugge Raid on 23 April 1918. Fisguard, was a shore establishment of the Royal Navy active at different periods and locations between 1848 and 1983. She was used to train artificers and engineers for the Navy.

At an Imperial Conference held in 1909, it was decided to deploy to Australian waters a naval unit consisting of at least a battle cruiser, three second class cruisers, six destroyers, three submarines and a number of auxiliaries. Detailed discussions were held on 19 August 1909 between representatives of the British Admiralty and the Australian Government that resulted in a decision to proceed with the establishment of an Australian Fleet Unit. The first units of this Navy, the destroyers, H. Ships Yarra and Parramatta, reached Australian waters in November 1910 and in the following year on 10 July 1911, His Majesty King George V granted the title of'Royal Australian Navy' to the Commonwealth Naval Forces. In June 1912, a third destroyer, H.

Warrego was commissioned at Sydney and in 1913 the battle cruiser, H. Australia and the light cruisers, H. Ships Melbourne and Sydney arrived in Australian waters.

The first cruiser laid down for the R. Was Sydney which was launched in August 1912 by Lady Henderson, wife of Admiral Sir Reginald Henderson. She commissioned at Portsmouth on 26 June 1913. She departed Portsmouth on 25 July 1913 and first arrived on the Australia Station at Albany on 19 September 1913.

On 4 October 1913 she formed part of the Australian Fleet Unit that ceremonially entered her namesake harbour to a rapturous welcome from tens of thousands of spectators who turned out on the shores of the harbour to welcome the arrival of their fleet. Frederick Turner was one of the original crew to commission and bring H. And in fact one of the founding members of the R. Prior to the outbreak of the war the permanent strength of the R. At that time comprised 3800 personnel, of whom some 850 were on loan from the Royal Navy.

The days preceding the outbreak of war in August 1914 found Sydney in Queensland waters. On 3 August 1914 she was joined at Townsville by the destroyers H. Warrego and Yarra before proceeding north to form a unit of Admiral Patey's Pacific Squadron.

Following the outbreak of war on 4 August 1914, Sydney operated in New Guinea and Pacific waters and in the brief campaign against the German Pacific possessions during which she carried out a series of punitive patrols. Highlights during this period included the capture of Rabaul (9 to 11 September 1914) and the destruction of the Angaur Island Wireless Station on 26 September 1914.

The convoys escort comprised Sydney, Melbourne, H. Minotaur and the Japanese cruiser Ibuki. The convoy sailed from Albany on 1 November 1914 and on the morning of 9 November 1914 was steaming some 50 miles east of the Cocos Islands. At about 06:20 on 9 November, wireless telegraphy operators in several transports as well as in the escorting warships received signals in an unknown code followed by a query from the Cocos Island station,'What is that code'? It was in fact the German cruiser Emden under the command of Captain Karl von Müller, ordering her collier Buresk to join her at Point Refuge to coal.

Shortly afterwards, the Cocos Island telegraphists signalled'Strange warship approaching followed later by the same message prefixed by S. By 07:00 Sydney was doing twenty knots and at 09:15 had simultaneously sighted the island and the Emden some seven or eight miles distant. Emden opened fire at a range of 10,500 yards using the then very high elevation of thirty degrees. Her first salvo was'ranged along an extended line but every shot fell within two hundred yards of Sydney. The next salvo was on target and for the next ten minutes the Australian cruiser came under heavy, accurate fire.

Fifteen hits were recorded but fortunately only five burst. It was during the opening stage of the engagement that Sydney sustained all of her casualties. Two shells from a closely-bunched salvo hit the after-control platform wounding all of the personnel closed up there, while a direct hit on the upper bridge range finder took off the operator's leg putting the equipment out of action. Sydney's first salvo went'far over the Emden'. The second fell short and the third scored two hits. Meanwhile, Von Müller, aware that his only chance lay in putting Sydney out of action quickly, maintained a high rate of fire, reported to be a salvo every six seconds. It was to no avail. In spite of the damage to her range-finders Sydney used her superior speed and fire power and raked the German cruiser.

Her shells wrecked the enemy's steering gear, shot away both range-finders and smashed the voice pipes, severing communications between the conning tower and the guns. Shortly afterwards Emdens forward funnel toppled overboard followed by the foremast which carried away the primary fire control station and wrecked the fire bridge. Despite the damage and the inexorable end, Von Müller continued the engagement. Half his crew was disabled until'only the artillery officer and a few unskilled chaps were still firing.

Finally, with his engine room on fire and with a second funnel gone, he gave the order'to the island with every ounce you can get out of the engines. Shortly after 11:00, Emden was seen to be fast on the North Keeling Island Reef. At the conclusion of the action Sydney heading for Colombo, from where she later proceeded to Malta where she arrived on 3 December 1914.

On 9 September 1916 Sydney finally left Bermuda, arriving at Devonport on 19 September before proceeding to Greenock for refit. On 31 October 1916 she was temporarily attached to the 5th Battle Squadron at Scapa Flow.

On 15 November she sailed for Rosyth and on arrival joined her sister ships HMS Southampton, HMS Dublin and HMAS Melbourne as part of the 2nd Light Cruiser Squadron, attached to the 2nd Battle Squadron of which HMAS Australia was the flagship. For the remainder of the war her service was confined to North Sea patrols. On 4 May 1917, while on patrol from the Humber estuary to the mouth of the Firth, Sydney fought a running engagement with the German Zeppelin L43 until Sydney had expended all the anti-aircraft ammunition and the L43 all her bombs. Nil damage to either parties. Sydney sailed from Portsmouth on 9 April 1919 for the return passage to Australia calling at Gibaltar, Malta, Port Said, Port Suez, Aden, Colombo, Singapore, Penang, and Thursday Island before arriving in her home port of Sydney on 18 July 1919.

Operating with the Fleet, mainly in home waters, she served in this role until 1929. In 1918 a commemorative medallion was struck by the Navy to recognise Australias first naval fight. The centrepiece for this medallion consisted of a Mexican silver dollar, of which some 6429 were recovered from the wreck of Emden.

The coins were mounted by the Sydney jeweller W Kerr and presented by Captain Glossop to the officers and men of the Sydney who were on board at the time of the engagement. A rare piece of Australian military history.

Frederick Turner was one of the first men to be recruited and posted as a "Electrical Artificer", and as such he was one of the 850 Royal Navy sailors who was seconded to the Royal Australian Navy on its formation. S Sydney and one of the few R. Present at Australia's first military action in WW1 with the capture of German New Guinea.

We appreciate fair feedback from you once you receive the item. We aim to give you, the customer our best customer service. The item "WW1 HMAS SYDNEY EMDEN ACTION BRITISH ROYAL NAVY MEDAL GROUP OF 5 WITH BADGES" is in sale since Thursday, October 17, 2019. This item is in the category "Collectables\Militaria\1914 - 1918 (WWI)".