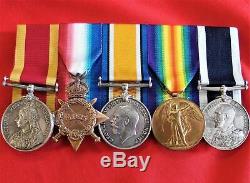 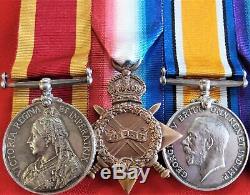 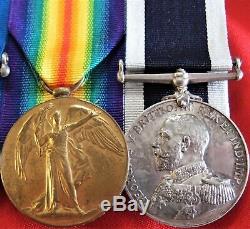 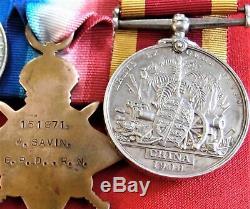 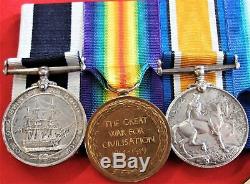 Offered is a China 1900 campaign & First World War service medal group to Chief Petty Officer Walter Savin, Royal Navy. Display court mounted medals include: China War Medal 1900, impressed named to W. 1914/15 Star, impressed named to 151971. British War and Victory Medals, impressed named to 151971. 1st issue, impressed named 151971. Medals in very fine condition, with no damage or issues and come with copied service record sheets, showing medal entitlement and service. Walter Savin was born on the 5th August 1874 in Cottisford, Oxfordshire. He joined the Royal Navy at the age of 18 on the 5th August 1892. , Sans Pareil, Emerald, Dido, in which he served in the China Boxer Rebellion, earning him his China Medal on the 20th May 1902, Alexandra, Irresistible when she ran aground at Malta on 5 October 1905, Dreadnought (sea trials crew), Victorious, Formidable, Blanche (1912 Nov 1916) which was present at the Battle of Jutland , being assigned to a position at the rear of the squadron during the battle and did not fire her guns.

Whilst aboard Blanche, he received his Long Service & Good Conduct Medal on the 4th June 1916. He finished with training establishments and troops transports til the end of the First World War, being pensioned of 10th March 1920. We list militaria and coins weekly.

We provide quality mounted medals, badges and historical research. We can mount your miniature or full size medals, ribbon bars or supply replacement ribbons or badges. We can also conduct military research on your behalf and value cherished objects with a current market or insured value. 2/135 Russell St, Morley, WA. We run two specialist military auctions per year.

The item "WW1 ROYAL NAVY MEDAL GROUP CHIEF PETTY OFFICER SAVIN & CHINA SERVICE & RESEARCH" is in sale since Friday, April 10, 2020. This item is in the category "Collectables\Militaria\1914 - 1918 (WWI)". The seller is "jb_military_antiques_14" and is located in 2/135 Russell St, Morley, Perth, WA. This item can be shipped worldwide.