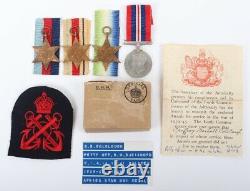 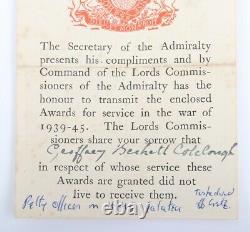 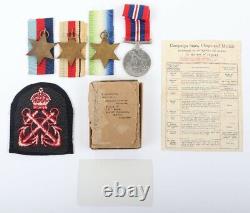 Medals remain in good condition with ribbons and wax paper envelopes. Geoffrey Beckett Colclough joined the Royal Navy some time after 1928. In 1941 he was a Petty Officer serving on HMS Galatea when on the 14th December 1941 she was torpedoed and sunk by a German U-Boat off the coast of Crete. HMS Galatea was a light cruiser of Arethusa class.

She saw much service during WW2, taking part in the Norway campaign, the evacuation of the British forces from Dunkirk and the operation to pursue and destroy the German battleship Bismarck. She joined the 15th Cruiser Squadron in the Mediterranean in late 1941. On the night of 14th December 1941, the squadron was returning to Alexandria after an unsuccessful search for an Italian convoy bound for Benghazi. Throughout the evening HMS Galatea was subjected to attacks from German dive bombers, the attacks lasted for about seven hours.

The cruiser turned over and sank in three minutes. The ships Captain, 22 officers and 447 ratings were all killed. About 100 of the survivors were picked up by the destroyers HMS Griffin and HMS Hotspur. The U-Boat which sank HMS Galatea was rammed by an Italian motor torpedo boat Orione on its return after this action on 16th December 1941, she sank with no survivors.

Petty Officer Colcloughs body was not recovered and his name is recorded on the Plymouth Naval Memorial. The item "WW2 British Royal Navy HMS Galatea Killed in Action Medal Group" is in sale since Saturday, May 22, 2021.