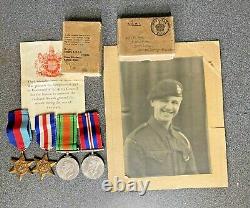 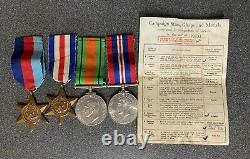 A good group of four original WW2 Medals complete in their original RAC issue box. They are complete with their ribbons and army medal issue slip. RAC (Royal Armoured Corps), plus their is a nice uniform photo of the recipient. The group was originally on display for many years at a British Legion Members Club in a glazed wall frame. The item "WW2 MEDAL GROUPING X4 ROYAL ARMOURED CORPS BOXED PHOTO & SLIP EX BRITISH LEGION" is in sale since Friday, June 25, 2021. This item is in the category "Collectables\Militaria\World War II (1939-1945)\Field Gear". The seller is "captain-pike" and is located in GB.